Ali Zafar's Female Band Members Defend Him Against Meesha Shafi's Allegations. "We Were There Too," They Say 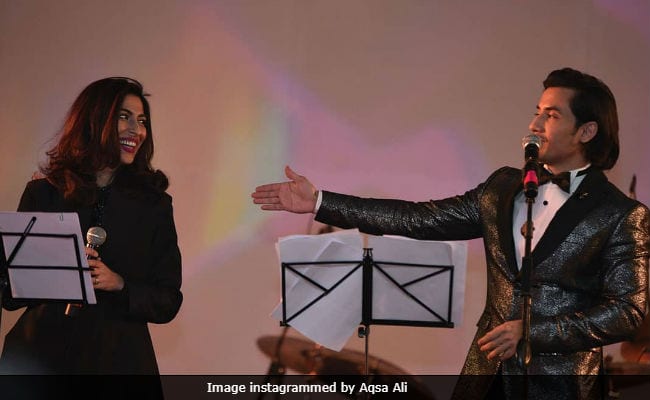 Ali Zafar with his band member during a performance. (Image courtesy: Aqsa Ali)

New Delhi: Pakistani singer Ali Zafar's female band members have come out in support of the singer against the allegations made by singer Meesha Shafi. On April 19, Meesha Shafi accused Ali Zafar, with whom she's performed in a few concerts, of sexual misconduct in a lengthy Twitter post. Ali Zafar posted his statement few hours later, in which he "categorically denied" all claims of harassment lodged by the 36-year-old singer. Meesha later gave an interview to a Pakistan daily in which she gave a detailed account of the day when she was allegedly harassed by Ali Zafar. After Meesha's interview went viral, Ali Zafar's band members Aqsa Ali and Kanza Munir shared their version of the same day on their respective Instagram accounts.

"I stand witness to this particular 'Jam' late last year that Meesha mentions in her interview... The whole house band and another fellow female vocalist were present and whatever interaction took place between the two was in front of at least 10 other people. All I can say is that this particular statement that she makes here is rather odd," wrote Kanza Munir, who has worked with Ali Zafar and his band on again and off again for the past three years.

I have been working with Ali Zafar on and off since the past 3 years or so and up until now I've been quietly observing the current situation because I am no judge of personal character be it Meesha Shafi or Ali Zafar. However, I stand witness to this particular 'Jam' late last year that Meesha mentions in her interview with The News. The whole house band along with myself and another fellow female vocalist were present during this session and whatever interaction took place between the two was in front of at least 10 other people. All I can say is that this particular statement that she makes here is rather odd. I have toured with the Ali Zafar band a lot of times and all my trips have been really pleasant and professional and we've spent hours jamming together. It would be great if this important movement isn't taken for granted or misused for personal reasons stealing limelight from real causes. Rest, time will tell!!

"I was at this jam session because I sing in Ali's band and so was her (Meesha Shafi) manager and our entire band. We all have pictures, we were there and event manager was there and it was a great jam session," Aqsa Ali posted on Instagram.

So as the stories taking turn every minute regard Ali Zafar, MeeshaShafi &#metoo movement, I think as a musician and a woman I should talk about this issue as I was SHOCKED right now with this article of Meesha. She said that her conscious doesn't allow her to say quiet so mine also doesn't allow me. As I am the part of concert crew, I travel intl and locally with Ali Zafar, and I have seen girls throwing themselves at him and his gentlemanly response to that which is so rare of any rockstar. balkay we all travel like friends and we work in a very comfy environment. Today finally Meesha tells us what she says happened to her that Ali harassed her at a jam or did something wrong to her and I cannot stay quiet. I was at this jam session becoz I sing in Ali's band and so was her manager and our entire band. I am astonished that she would take a lie to this level which so many of us can prove wrong. We all have pictures, we were there and event manager was there and it was a gr8 jam session. I am a woman and I would never allow wrong to any woman. But come on , it's a serious matter and we should be really clear on everything rather then putting accusations on people and then saying sorry you cannot question any woman it's wrong. Ali is a genuine person, who treats people around him nicely and has always been a support system for everyone; Accusing some1 is easy but living with the guilt is difficult. As a woman I felt sad with her rude behaviour towards everyone including the band but more I feel bad that she's causing disrespect to this Intl movement of women and all of us female musicians and hard working women.

Speaking to The News, Meesha Shafi alleged that Ali Zafar misbehaved with her on several occasions and she recollected last year's jam session in Lahore. "I was jamming with my band and the organisers insisted that he was trying to get in touch. It started turning into a thing, and I was being seen as difficult or a diva, I got such feelers. I was avoiding him. I was asked to jam, figure out songs, scale and it happened while we were jamming," she was quoted as saying.

Meesha in her original post cited the 'Me Too' campaign, which gained momentum after Hollywood's Harvey Weinstein scandal, and said: "It is not easy to speak out but it is harder to stay silent. My conscience will not allow it anymore."

This is Ali Zafar's statement:

#MeToo needs a response #ImSorry from the offenders. Nothing will change until they acknowledge, take responsibility and make amends. pic.twitter.com/sphI1c1agT

Promoted
Listen to the latest songs, only on JioSaavn.com
Ali Zafar has starred in several Bollywood films such as Kill Dil, Mere Brother Ki Dulhan and Dear Zindagi.

Meesha Shafi has starred in films like Bhaag Milkha Bhaag and The Reluctant Fundamentalist. She's recorded songs such as Aaya Lariye and Alif Allah for Coke Studio Pakistan.