And, our day was made 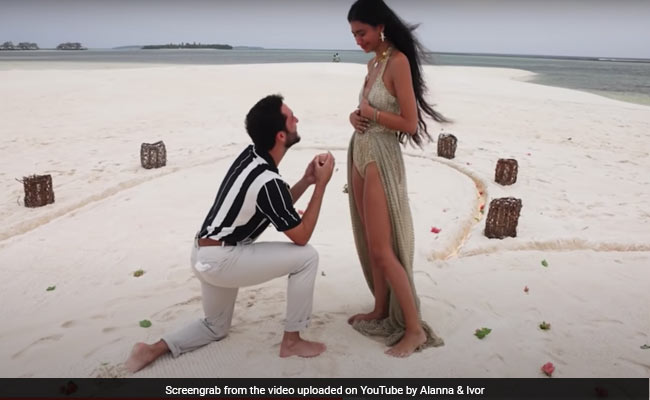 Finally, Alanna Panday has dropped a video of her dreamy proposal. Aww. Well, we must give credit to Ivor for planning such a wonderful set up. Ivor popped the million-dollar question on a beach in the Maldives on November 5. Some of the pictures from the couple's happy day made their way to our feed, thanks to Alanna. And, now we have the video and a long note penned by Alanna herself. The video opens to an aerial shot. We can see Alanna walking into a giant glowing heart in the sand. At a distance, “Marry Me” is also written on the sand. Are you crying already? Moments later, the two are holding hands and walking toward the set-up. And, here comes the moment. Ivor gets down on one knee and pops the ring. To which, a teary eye Alanna says, “Yes” and nods her head.

Now, let us focus on Alanna Panday's love-filled note. Describing the morning of their “2 year anniversary”, Alanna wrote, “ We woke up that morning to a cloudy day and a bad storm. I looked over to Ivor to kiss him and say “I love you, Ivs. Happy two years, what should we do today?” He responds, “Not sure, I haven't really planned anything”. I found this really odd. Anyone who watches our YouTube videos knows that Ivor is the most loving and caring boyfriend in the world and this was very unlike him. We landed up staying in the room all morning and afternoon waiting for the storm to clear.”

Alanna Panday, who is also actress Ananya Panday's cousin, continued, “Since we had nothing to do I decided to take a nap after lunch. I wake up to an empty room all alone, I text Ivor immediately and he tells me he went for a bike ride. I start to tear up immediately. Not only have I sat in the room all day, my boyfriend is now taking a leisure bike ride without me on the beach on our anniversary.”

And, the surprise is knocking at the door. As per Alanna Panday's note, “15 minutes later, he [Ivor] reaches the room. He kisses me on the forehead and said look, the Sun is out... Should we shoot some content for our anniversary? He goes to my suitcase, picks out an outfit and rushes me to get ready. At this point, I am still very low but decides not to show it.” This is getting even more interesting. Isn't it?

Upon reaching the location, Alanna Panday said, “We get off and walk through the path with lights into the middle of the heart. I thought to myself “wow this is so gorgeous, wonder which lucky girl this is for” we reach to the middle and it hits me “did you do this ivs?” I said, I start to cry immediately. He looks at me, starts to tear up too and gets down on one knee.”

Alanna Panday's mother Deanne Panday dropped a bunch of heart emojis and wrote, “Love you both”.

And, we also have some pictures from the proposal day. Here, Alanna Panday called Ivor her “ perfect other half and I love you more and more every day.”