Akshay Kumar's PadMan: The Real 'Pad Man' Reveals He Was On Set To 'Guide' Filming 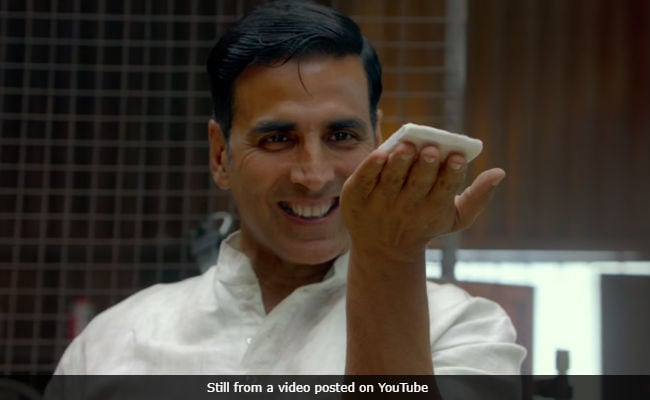 Mumbai: Akshay Kumar's PadMan, a movie about an inventor, who created a revolutionary machine that makes cheap sanitary pads hits screens this week, challenging taboos surrounding menstruation in India. Arunachalam Muruganantham is nicknamed "menstrual man" for transforming the lives of poor women forced to use items like old rags, sand and leaves during their periods. He has been lauded by the government and is now getting the star treatment with Akshay Kumar portraying him in PadMan, releasing on Friday. It is the latest socially conscious movie to come out of Bollywood.

Muruganantham hopes the movie will help raise awareness about the importance of menstrual hygiene in India where women, in some rural areas, are frequently shunned during their monthly cycles.

"Menstruation is still a taboo subject in India and a tough subject for a film," he told AFP by phone from Tamil Nadu.

"But I read the script and I was also on the sets to guide them. I think R Balki (the writer and director) has handled the subject beautifully.

"People will talk about personal hygiene and it will give hope to the younger generation to do innovative things," he added.

Muruganantham's remarkable story began in the late 1990s when he was shocked to discover that his wife was using newspaper and dirty clothes during menstruation because sanitary pads were too expensive.

He decided to do something about it and started experimenting with different designs using cotton.

His first few prototypes were not very successful and quickly his wife and sisters refused to be guinea pigs any longer.

When other women in the village baulked at his requests to try his products he started testing them on himself, using a football bladder and animal blood.

Muruganantham was mocked and ostracised by fellow villagers, and his wife even left him for a while, but he remained undeterred and intensified his search.

After two years he discovered that sanitary pads are made from cellulose found on trees.

Muruganantham also learnt that the machine which ground down the pulp before turning it into napkins cost hundreds of thousands of dollars so he decided to create his own.

In four years he had invented an easy-to-use device which could produce pads at a third of the cost of the commercially produced ones. The machines themselves were also vastly cheaper at around 75,000 rupees ($1,170).

"I wanted to make sure that technically we did not go wrong, so he agreed to supervise," Balki, the director, said of Muruganantham's role on set.

Actresses Radhika Apte and Sonam Kapoor star alongside Akshay Kumar whose character based on Muruganantham is called Lakshmi.

The 50-year-old actor, whose films regularly rake in more than one billion rupees ($15.6 million) at the box office, is no stranger to starring in movies with an important message.

Last year's comedy, Toilet: Ek Prem Katha (Toilet: A love story), focused on the lack of toilets in India and the problem of open defecation.

It was a soaraway success, grossing upwards of $2 billion rupees, but Balki says a film about periods is an altogether different proposition.

"PadMan is possibly the riskiest film Akshay has done because of the taboo, unexplored subject," he told AFP.

Several million more Indian women are now estimated to use sanitary pads thanks to Muruganantham.

His company, Jayaashree Industries, has more than 2,000 units across the majority of states and also exports to dozens of countries. The machines also provide employment to thousands of rural women.

In 2014, he was included in Time magazine's list of 100 most influential people in the world. Two years later the government awarded Muruganantham one of the country's highest civilian honours.

Promoted
Listen to the latest songs, only on JioSaavn.com
The release of PadMan is set to elevate his fame further but he insists he won't be letting it go to his head.

"The cause is becoming big, but I am remaining the same," he told AFP.