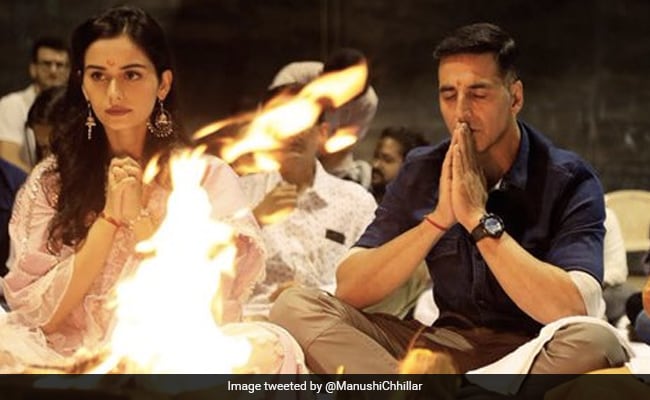 Akshay co-stars with Manushi Chhillar in the movie (courtesy ManushiChhillar)

Busy star Akshay Kumar just wrapped the shoot of Bell Bottom, dropped the trailer of Laxmmi Bomb and also showed up on the sets of his upcoming movie Prithviraj. Akshay Kumar co-stars with Miss World 2017 Manushi Chhillar in the movie, which is being directed by Chandraparaksh Dwivedi. In a statement, the filmmaker revealed that Prithviraj is back on tracks after a hiatus of six months. "Yes, we have resumed Prithviraj shoot at YRF studios and the entire team is excited to have a great shooting schedule," the director said in a statement, reported PTI. Akshay was also spotted at the Yash Raj Films studio in Mumbai on Sunday. PTI reports that a huge set for Prithviraj's shoot has been created inside the YRF studio in Mumbai.

Prithviraj, which is a biopic of Prithviraj Chauhan, stars Akshay Kumar in the titular role. Manushi has been roped in to play Sanyogita, Prithiviraj's wife. Akshay has reportedly begun shooting along with actor Sonu Sood while Manushi is expected to join the sets sometime soon. Sanjay Dutt, who also stars in Prithviraj, is reportedly expected to join after Diwali - he is currently on a break from work because of health issues. Prithviraj, announced in 2019, was slated for a Diwali 2020 release, which has now been postponed.

Last week, Akshay Kumar touched down in Mumbai after finishing the shoot of Bell Bottom in UK.

He released the trailer of Laxmmi Bomb on Friday - the film will release on November 9.

Apart from these projects, Akshay Kumar's list of upcoming movies include Bachchan Pandey, Sooryavanshi, Atrangi Re and Raksha Bandhan.