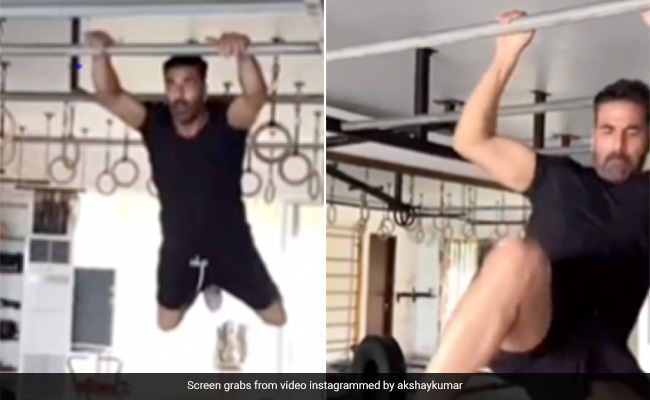 Feeling dull and mid-week blues? Let Akshay Kumar help you boost your energy. He is one of the fittest actors in Bollywood. If you are wondering about the secret behind his staying in good shape throughout the years, Akshay's latest post on Instagram is just for you. The actor, on Wednesday, shared a glimpse of his “best mornings.” It will definitely give you fitness goals. Wearing a black tee with matching shorts, Akshay Kumar is seen smoothly acing the monkey bar jumps at a workout space. In the caption, he asked his fans to share what their “best mornings” look like. He wrote, “My best mornings are those that start like this. Yours? Wednesday motivation.” Fans were impressed by Akshay's fitness routine. “Excellent, sir,” commented one user while another wrote, “Wow…at this age (fire emoji).” Actor Tiger Shroff, who is known for his amazing action sequences, said, "Woaahh".

Akshay Kumar, at the age of 55, continues to perform the action sequences for his films by himself. He has learnt several martial art forms over the years. For Diwali this year, the actor organised the 14th international Kudo tournament in Gujarat. A part of the clip features him breaking bricks with a hammer. “Thank you for celebrating your Diwali with us here at the Akshay Kumar 14th International Kudo Tournament. Coming here is always humbling, meeting you all reminds me of my beginning. I hope with the help of this tournament, we help Kudo grow in India with each passing year,” read his caption.

On the work front, Akshay Kumar was last seen in Ram Setu, which was released on October 25. Nushrratt Bharuccha, Jacqueline Fernandez and Satyadev are also part of the film.

Next, the actor has Bade Miyan Chote Miyan, Selfiee and the Hindi remake of the National Award-winning Soorarai Pottru.