Akshay Kumars Gold co-star Mouni Roy was among the first to drop a comment under the post. 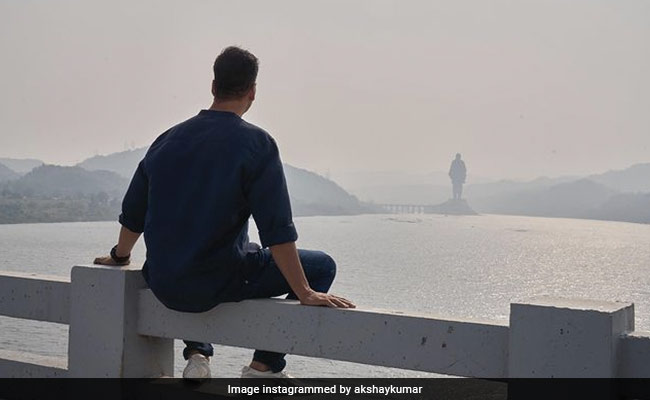 Hey Akshay Kumar fans, we have something new in store for all of you. The actor has shared a snapshot of his Sunday view on Instagram. Oh boy, it is breathtaking. Here, Akshay Kumar is sitting on a railing as he looks at the Statue Of Unity, the World's tallest statue. Sharing the picture, the actor wrote, “I am in Ekta Nagar, home to ‘Statue of Unity' the world's tallest statue. So much to do here in the lap of nature.” He then asked, “Have you been here?” Akshay Kumar's Gold co-star Mouni Roy was among the first to drop a comment under the post. She shared raising hands and trident emblem emojis.

Meanwhile, Akshay Kumar is gearing up for his Marathi debut.  The actor will play the role of Chhatrapati Shivaji Maharaj in Vedat Marathe Veer Daudle Saat, directed by  Mahesh Manjrekar.

Speaking about the role, Akshay Kumar told the news agency PTI that it is a “big responsibility”. "It is a huge deal for me to play the Chhatrapati Shivaji Maharaj. To play the role of such a legendary personality is a huge responsibility. I am so happy about this. It is a dream come true kind of role. It is a huge task and I would like to say I will give my best," he was quoted as saying.

Akshay Kumar also has Selfiee alongside Emraan Hashmi, Nushrratt Bharuccha and Diana Penty in the pipeline. He is also part of Bade Miyan Chote Miyan and the Hindi remake of the National Award-winning Soorarai Pottru.