"Our battle with COVID-19 is not over, but we will not be afraid of the virus," read the tweet shared by PIB 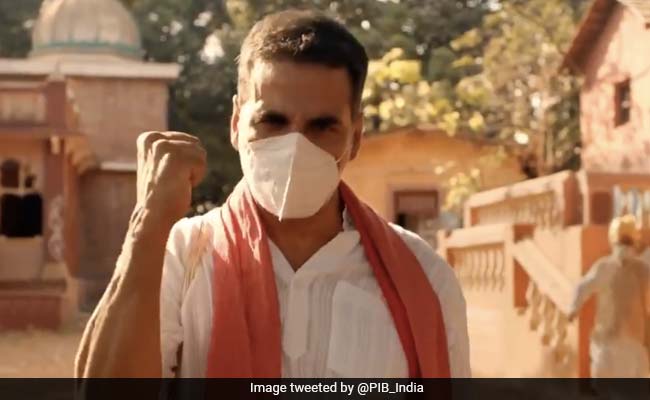 Akshay Kumar in a still from the ad. (courtesy PIB_India )

Remember the advertisement that Akshay Kumar and filmmaker R Balki were shooting for during the lockdown, a few days ago? The commercial was released on the official Twitter handle of the Press Information Bureau (PIB) on Tuesday. The idea behind the video was to send across a message to people to "move on with their lives" and spread awareness about the post lockdown responsibilities while taking all the necessary precautions. At the end of the video, Akshay signed off with a reminder to wear masks before stepping out for work. The video showcases a masked Akshay Kumar in a rural setting, stepping out of his home, while he is interrupted by his neighbour. In the one-and-a-half minute advertisement, the neighbour asks Akshay if he isn't afraid of catching coronavirus. To which, the actor responds by saying that initially he was afraid. However, he later learned that if one takes precautions, catching the virus is unlikely.

The tweet shared by PIB's official Twitter handle read, "Our battle with COVID-19 is not over, but we will not be afraid of the virus. We will take all precautions and we are going to move on with our lives." It was accompanied by the hashtags #IndiaFightsCorona and #BreakTheStigma.

Our battle with #COVID19 is not over, but we will not be afraid of the virus. We will take all precautions and we are going to move on with our lives

Akshay Kumar and filmmaker R Balki, with whom the actor has worked in films like PadMan and Mission Mangal, shot for the Health Ministry's advertisement at Mumbai's Kamalistan Studio a few days ago while taking the much-required necessary precautions.

Speaking of the advertisement earlier, R Balki told news agency PTI, "This is an ad for the Health Ministry, featuring Akshay Kumar about the post lockdown responsibilities of each one of us. We need to get back to work but ensure our safety and those of others. So at our shoot we did the same. Like getting back to work with social distancing, sanitised outdoor set, disinfectant screen, masks. We got used to it in a few minutes. There was minimal crew and very strict protocols."