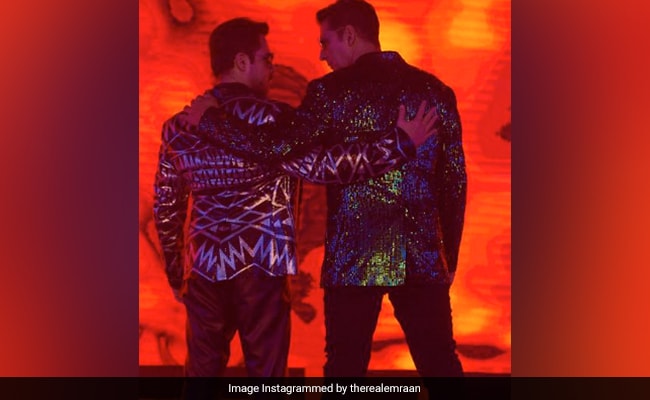 Bollywood actor Emraan Hashmi, on Thursday, shared a behind-the-lens image with actor Akshay Kumar from the sets of the iconic song Main Khiladi Tu Anari, which is being recreated for the film Selfiee.

Taking to Instagram, the Jannat actor shared the picture, captioning it, "28 years after the original . The OG khiladi with the new Anari. This stare down led to a dance off. And what a dance off it was. (Haven't stopped icing my feet ever since) #selfiee.

In the picture, both the senior actors could be seen posing with their back to the camera lens and hands on each other's backs.

Recently on actor Saif Ali Khan's birthday, Akshay dropped a video from the same set with his choreographer, announcing the remake of the iconic song from the 1994 film Main Khiladi Tu Anari for his upcoming film Selfiee.

The original track featured the Raksha Bandhan actor along with Saif Ali Khan and gathered massive responses from the audience.

Selfiee is the Hindi remake of the Malayalam film Driving License, which starred Prithviraj and Suraj Venjaramoodu in the lead roles. Now, Akshay and Emraan will reprise their roles for the remake. Filmmaker Raj Mehta has come on board to helm the project. It is produced by the late Aruna Bhatia, Hiroo Yash Johar, Supriya Menon, Karan Johar, Prithviraj Sukumaran, Apoorva Mehta and Listin Stephen.

The film marks the first-ever on-screen collaboration of Akshay and Emraan and is all set to hit the theatres on February 24, 2023.

Meanwhile, Akshay will be next seen in Ram Setu alongside Jacqueline Fernandez and Nushrratt Bharuccha, which is slated to release on the occasion of Diwali 2022.

He will also be seen opposite Radhika Madan in the Hindi remake of Suriya's Tamil film Soorarai Pottru. Apart from Akshay and Radhika, Paresh Rawal will reprise his role from the Tamil original. Director Sudha Kongara is also returning to helm this film. The shooting began in April. No release date has been announced so far.

On the other hand, it has been speculated that the Jannat 2 actor is going to portray a negative character opposite Salman Khan in Yash Raj Film's Tiger 3. The official announcement from the makers is still awaited.