"When I had started out in the industry, there was this huge buzz that 'he is a very ordinary looking guy'," said Ajay Devgn 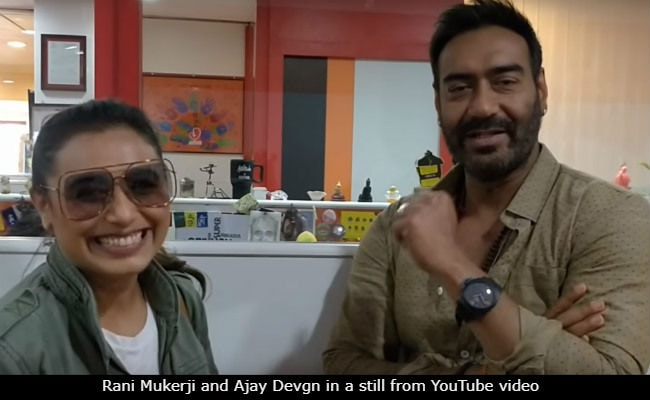 New Delhi: Ajay Devgn, who likes to "work on his terms and conditions", recently opened up about his hichki of sorts during his initial days in the industry. "Very ordinary looking," Ajay was told when he was starting out in Bollywood, he told Rani Mukerji. But Ajay Devgn said, instead of being affected by the negative criticism as an aspiring actor, he channeled it to inspire him to work better. "When I had started out in the industry, there was this huge buzz that 'he is a very ordinary looking guy, he's not hero material and he won't make it' and stuff like this. I used to hear all of that, and it felt like a hichki but I never bothered. But I never used to bother and I just went on," the Raid actor told Rani Mukerji.

"So, the best part was that - don't bother about the hichki but make it your inspiration," added the 48-year-old actor.

Not just Ajay Devgn but Katrina Kaif, Shah Rukh Khan and Anil Kapoor are also some of the celebrities who have contributed to the promotion of Hichki. Watch Ajay Devgn talk about his hichki here.

Ajay Devgn's new film Raid released last Friday and is currently running at the theatres and raking in crores. Directed by Rajkumar Gupta, Raid is based on the story of the longest Income Tax raid India has witnessed. Ajay plays the role of Amay Patnaik - the Deputy Commissioner of Income Tax, who headlined the longest IT raid.

In an interview with NDTV recently, the actor was asked if the option of choosing films come with time and success, when he said: "Yes, it comes with time. You need to be lucky to get this kind (Raid) of roles by the right people at the right time. Also what's paying off is when I had an image of an action hero in the 90s, I started doing parallel cinema, which today thankfully is not called parallel cinema anymore. Everyone is doing it. I did films like Zakhm and Raincoat. Those films taught me a lot, and that also broke the mould of an action hero. That was a risk because action films were not doing well in those days."

Ajay Devgn is best known for films like Singham, Gangaajal, Zakhm, Phool Aur Kaante and the Golmaal of movies. Ajay Devgn has films Eela and a biopic on Tanaji Malusare in the pipeline.