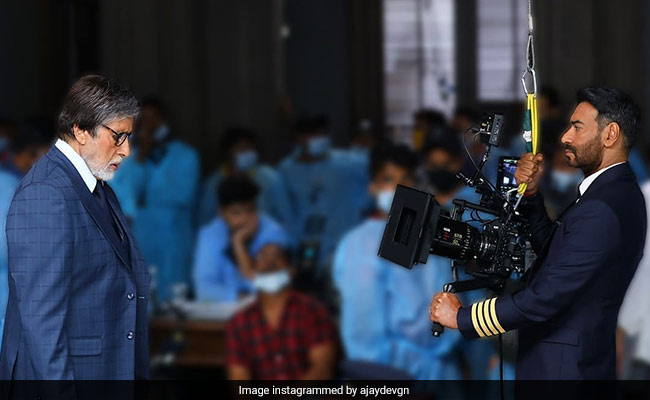 Ajay Devgn is a man of many talents. The actor and producer is also an able director as he has proved in the past. Now, Ajay Devgn has shared a behind-the-scenes picture of a moment where he is wielding the camera instead of performing in front of it. And as he turned director, Ajay Devgn had none other than superstar Amitabh Bachchan gracing the screen. In the image, Ajay Devgn seems to be dressed in the uniform of a pilot as Amitabh Bachchan is wearing a suit. Sharing the photo, Ajay Devgn wrote, “My kind of selfie,” with a movie camera emoji and the hashtag “Runway 34”.

Runway 34 is the name of Ajay Devgn's upcoming film that was initially titled MayDay. See the image here:

At the end of last month, Ajay Devgn shared three posters of the film and announced the release date and the change in the title of the film. Sharing details, Ajay Devgn wrote, “MayDay is now Runway 34. A high-octane thriller inspired by true events that is special to me, for reasons more than one! Runway 34 - Landing on Eid, April 29, 2022, as promised.”

In addition to the aforementioned actors, the film also features Boman Irani, Angira Dhar, Aakanksha Singh and YouTuber Ajey Nagar aka CarryMinati. In addition to directing Runway 34, the film is being produced by Ajay Devgn under his production banner, Ajay Devgn FFilms.

Recently in an interview with PTI, Ajay Devgn described Amitabh Bachchan as a “delight to work with.” He said, “He is a delight to work with. I've never seen a more dedicated actor; we are nothing in front of him. Once he is on set, he will keep rehearsing, keep thinking about the scene. It's phenomenal.”

Speaking about his bond with Amitabh Bachchan, Ajay Devgn said, “I've known him since I was a kid. So, whatever I had to take away from him, I must've taken it back then. It's imbibed. With him, it's a different rapport. From childhood, I could tell him whatever I wanted to. It took him two minutes to come on board. One narration and that's it.”

Ajay Devgn and Amitabh Bachchan have worked together in films such as Major Saab, Khakee, Aag and Satyagraha.