Ajay Devgn Is 'Obsessed' With His Kids Nysa And Yug, Says Co-Star. Doesn't Surprise Us 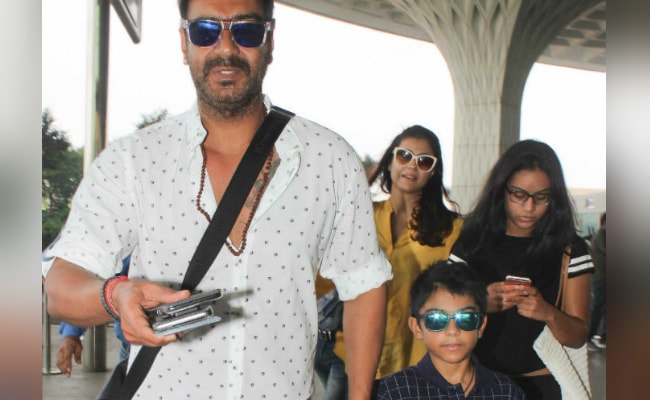 Ajay Devgn with his family at the airport

New Delhi: Ajay Devgn indeed has a reputation for being a doting father. Ajay and Kajol are parents to two children - daughter Nysa, 14, and a son named Yug, 7. Something that we know about the 48-year-old actor has been corroborated yet again by one of his co-stars - Ileana D'Cruz recently told IANS in an interview how attached Ajay Devgn is to his children. "He's a massive family man. He's obsessed with his kids, which is very lovely. He's really a positive person. When you are working with likeminded people then there are no pretences. So, it's nice working with him," said Ileana, who has worked in the actor in 2017's Baadshaho and was last seen on screen with him in recent release Raid.

Ileana also elaborated on her experience of working with the actor, telling IANS: "He is a very easy going person. When you are working with actors who are secure, who have nothing really to prove, it gets a lot easier working with them. You don't have to deal with insecurities of any sort and Ajay is that kind of person."

On his birthday last year, Ajay Devgn wrote told us in an Instagram post that Nysa and Yug are his "best birthday gifts." The sometime this year, Kajol revealed in an interview to Hindustan Times that sending Nysa to study abroad was more difficult for her husband than her. "It was very, very tough for me, but not as tough as it was probably for Ajay because I have myself studied in a boarding school away from home," Hindustan Times quoted her as saying.

Kajol and Ajay Devgn have admitted to fiercely shielding their children from the media glare. "Ajay and I consciously chose to keep kids away from media. Keeping them away from the spotlight at large is an attempt to give the children their space where they are not bogged down by any kind of pressure," Kajol had said in an interview previously. Meanwhile, Kajol's Instagram is also filled with posts featuring Nysa and Yug but our personal favourite is the one in which she records a conversation between the four members of her family. Check this out. Lol.

Promoted
Listen to the latest songs, only on JioSaavn.com
Nysa is currently in Singapore for her higher studies while Yug stays in Mumbai with his parents. Ajay Devgn, last seen in Raid, will return to the big screen with Total Dhamaal.