Ajay Devgn Is Holidaying In Paris With Kajol And Children. See Pics 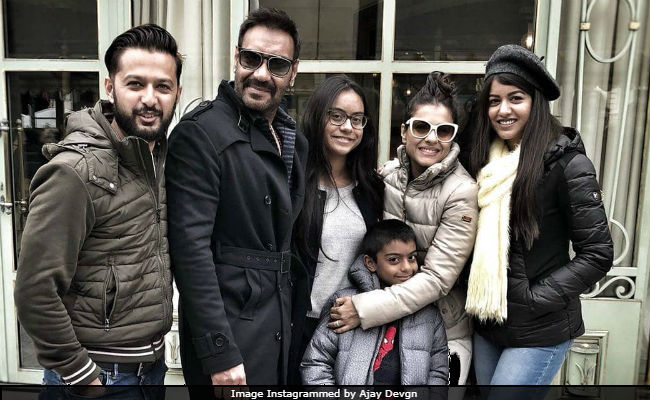 New Delhi: Ajay Devgn, who turned 49 on Monday, is ringing in his special day in Paris with wife Kajol, children Yug and Nysa. The Raid star shared two back-to-back posts on Instagram. In the first post, Ajay shared two pictures of his son Yug and captioned it, "Before and After." In the first picture, Yug appears to be sad and the next one sees him beaming with joy with a packet of sweets in his hands. Kajol also re-posted the picture of the father-son duo on her Instagram account along with a heart emoticon and wrote, "Just watching them like this." In the second Instagram post, Ajay shared a picture of the Devgn family is photographed with Tarzan co-star Vatsal Seth and his wife Ishita Dutta. He captioned the post, "Fetes d'anniversaire a Paris" which translates to 'birthday parties in Paris' in English. Here's what Ajay and Kajol posted on Instagram:

On Sunday night, Ajay along with wife Kajol and children flew out of Mumbai. The family was photographed at the Mumbai airport. Kajol was dressed in a brown top, blue jeans and brown sunglasses while daughter Nysa picked a grey sweatshirt to go with black tee and ripped black jeans. Ajay's son Yug was perched in his mother Kajol's arms.

Birthday wishes for Ajay Devgn have been pouring in on social media. Several of his co-stars including Riteish Deshmukh, Vivek Oberoi, Boman Irani, Saurabh Shukla have posted birthday messages on Twitter.

Happy Birthday Dearest Aj @ajaydevgn ... have a stupendous one and many congratulations on the success of Raid. See you on the sets soon.

Many happy returns of the day to my big brother the versatile @ajaydevgn! Have an amazing year! Congrats on the success of #Raid! Lots of love! Here's an old memory of us together hanging out at #Cannes 2007 I think! pic.twitter.com/77RjqjHflz

Promoted
Listen to the latest songs, only on JioSaavn.com
For Ajay Devgn's birthday trip to Paris, his daughter Nysa, who studies in Singapore, flew in to be with her family. It was tough for Ajay Devgn to send his daughter abroad for higher education. Speaking about which Kajol told Hindustan Times in an interview, "It was very, very tough for me, but not as tough as it was probably for Ajay because I have myself studied in a boarding school away from home."

Ajay Devgn, who was last seen in Raid, had Total Dhamaal, Sons of Sardaar in the pipeline.