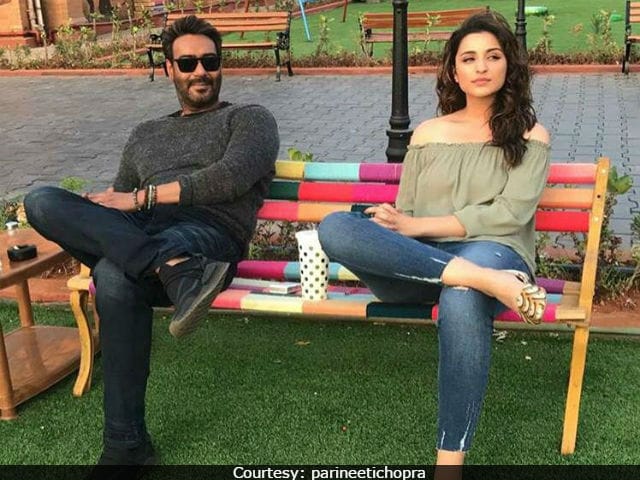 Ajay Devgn and Parineeti Chopra on the sets of Golmaal Again (Courtesy: parineetichopra)

New Delhi: Ajay Devgn and Team Golmaal Again are currently shooting the third schedule of Rohit Shetty's film in Goa. Meanwhile, they are also busy in promoting their co-star Parineeti Chopra's upcoming film Meri Pyaari Bindu. Don't believe us? We have proof. Ajay Devgn, Arshad Warsi, Tusshar Kapoor, Shreyas Talpade and Kunal Kemmu posed with a cut-out of veteran actress Bindu aka the real Bindu. In Meri Pyaari Bindu, Parineeti's character is called Bindu, who is an aspiring singer and dreams of becoming a rockstar. Parineeti could barely hold herself from laughing (quite evident from Ajay Devgn's post). Check out what team Golmaal Again is up to in Goa.

Parineeti too shared the picture on Instagram and wrote, "My crazyyyyyy boys!!! Love them."

Golmaal Again is the fourth instalment of Rohit Shetty's blockbuster comedy series, which began in 2006 with Golmaal: Fun Unlimited, Golmaal Returns (2008) and Golmaal 3 (2010). All the actors are reprising their roles from the previous part while Tabu, Parineeti and Neil Nitin Mukesh have joined the team this year.

Promoted
Listen to the latest songs, only on JioSaavn.com
Golmaal Again will be Parineeti's second film of the year after Meri Pyaari Bindu, which releases on May 12. Parineeti stars opposite Ayushmann Khuranna in the Akshay Roy-directed film.

Golmaal Again will hit the theatres during Diwali along with Aamir Khan's Secret Superstar. Earlier, Rajinikanth and Akshay Kumar's 2.0 was also scheduled for a Diwali release. However, due to delay in post-production work, 2.0 will hit the screens next year.