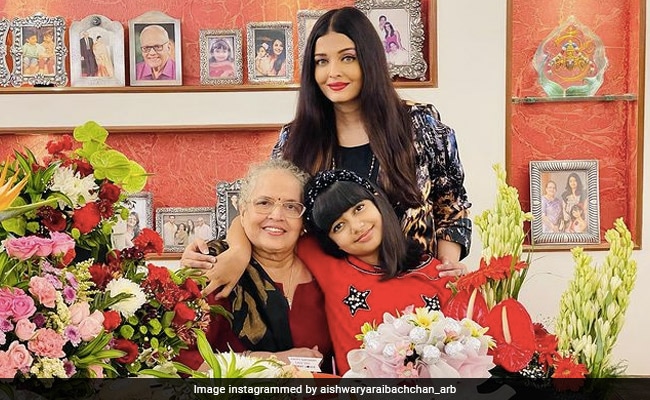 Aishwarya Rai Bachchan has had a very busy week. The actress, who returned from the Cannes Film Festival over the weekend, shared pictures from her mom Brindya Rai's birthday festivities. On Monday, the actress shared pictures from the celebrations on her Instagram post and she wrote: "Happy birthday dearest darling mommy-dodda. Love you forever and beyond. Gold bless always." The actress added multiple flower and heart emojis in her caption. The pictures also feature Aishwarya's husband Abhishek Bachchan and daughter Aaradhya, who were also the actress' plus two at the Cannes festivities.

Here's another post that the actress shared for her mom.

Aishwarya Rai Bachchan had a super busy week. Like every year, she attended the Cannes Film Festival, where she represented the cosmetic giant L'Oreal. Aishwarya was accompanied by Aaradhya and Abhishek Bachchan during her Cannes visit. The actress made two red carpet appearances at the 75th edition of the prestigious film fest. First, in a voluminous black gown with floral accents from Dolce and Gabbana. Her second red carpet appearance was in a custom Gaurav Gupta Couture gown inspired by Botticelli's famous painting The Birth Of Venus.

In terms of films, the actress will next be seen in Mani Ratnam's Ponniyin Selvan. Aishwarya Rai Bachchan was last seen in the 2018 musical Fanney Khan, co-starring Anil Kapoor and Rajkummar Rao. She had also dubbed for the Hindi version of the 2019 film Maleficent: Mistress of Evil, starring Angelina Jolie.