"Easter love, you all," Aishwarya captioned her post along with a bunch of red heart emojis 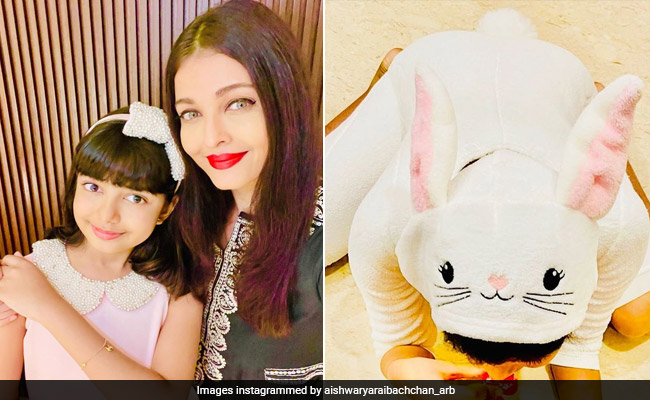 As is ritual, Aishwarya Rai Bachchan's Easter greeting arrived late night on Sunday. And just like most of her festive greeting cards on Instagram, this one too featured just her daughter. The 47-year-old actress shared an adorable post, featuring daughter Aaradhya and showered her Instafam with a whole lot of love. "Easter love, you all," Aishwarya captioned her post along with a bunch of red heart emojis. In the photo, Aaradhya can be seen dressed as an Easter bunny - in a pink bunny costume - as part of Easter festivities. Though Aaradhya's face is not visible in the photo, it sure is the nine-year-old Bachchan because we know her secret superpower is being adorable.

Here's how Aishwarya and Aaradhya wished fans and followers on Easter Sunday:

On Holi too, Aaradhya made an appearance on Aishwarya's Instagram. "Happiness, peace, good health and lots of love always. Happy Holi," Aishwarya wrote in her post as she shared glimpses of holika dahan at the Bachchan residence.

On Valentine's Day, Aishwarya had the sweetest message for daughter Aaradhya: "Love you eternally, infinitely and unconditionally, my darling angel Aaradhya."

Last seen in Fanney Khan, Aishwarya will reunite with Abhishek Bachchan on the big screen for Anurag Kashyap's Gulab Jamun. Aishwarya is also part of Mani Ratnam's upcoming movie Ponniyin Selvan. Apart from Gulab Jamun, Abhishek Bachchan will next be seen in The Big Bull, which will release on Disney+Hotstar. His line-up of films also includes a film based on Bob Biswas, which is being produced by Shah Rukh Khan.