Holi 2021: A Glimpse Of The Bachchan Residence In Aishwarya And Aaradhya's Holi Celebrations 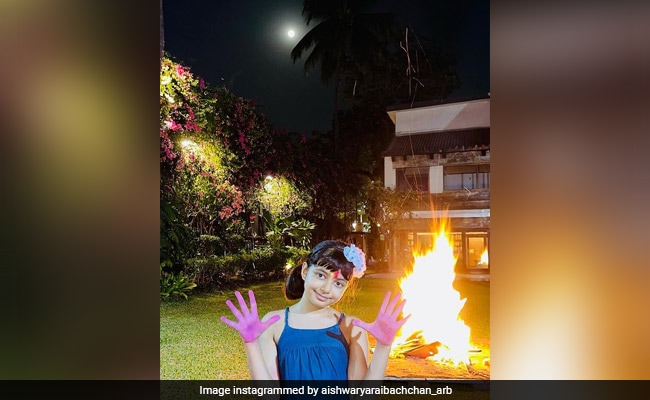 As is ritual, Aishwarya Rai Bachchan's Holi post arrived late at night on Monday. The 47-year-old actress shared glimpses of the Bachchans' Holi celebrations in an Instagram post. Aishwarya posted photos of the Holika Dahan ritual - where a pyre is lit, signifying the destruction of evil - and we also got a glimpse of the Bachchan home Jalsa. Of the Bachchan crew, only Aishwarya's daughter Aaradhya made it to the actress' Holi album and in the backdrop, there is just a glimpse of what appears to be a study room, which leads into the garden. The high walls around the Bachchan residence can be seen adorned with flowers as Aaradhya poses in the garden. Nine-year-old Aaradhya Bachchan played colours - pink was her favourite.

Earlier on Holi, Abhishek Bachchan shared a simple but rather important message on Holi: "Wish you all a very happy and safe Holi," he tweeted for his fans.

Celebrating Holi on social media, Amitabh Bachchan shared a priceless throwback from the family archives. In the Holi memory which appears to be from years ago, Amitabh and Jaya Bachchan can be seen playing with colours. Big B captioned it aptly with these lyrics: "Rang barse bheege chunar wali rang barse... holi hai." Rang Barse is an iconic Holi song from the 1981 movie Silsila, starring Amitabh Bachchan and Jaya.

Wish you all a very happy and safe Holi. 🙏🏽

Last seen in Fanney Khan, Aishwarya will reunite with Abhishek Bachchan on the big screen for Anurag Kashyap's Gulab Jamun. Aishwarya is also part of Mani Ratnam's upcoming movie Ponniyin Selvan. Apart from Gulab Jamun, Abhishek Bachchan will next be seen in The Big Bull, which will release on Disney+Hotstar. His line-up of films also includes a film based on Bob Biswas, which is being produced by Shah Rukh Khan.