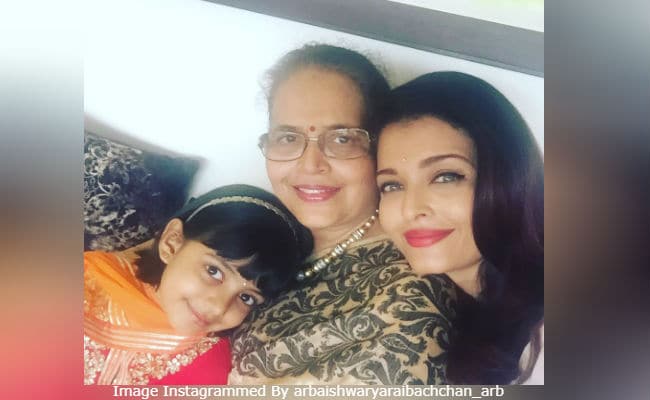 Some late posts on Raksha Bandhan were shared by Aishwarya Rai Bachchan, much to the delight of her Instafam. Aishwarya celebrated rakhi with mom Vrinda and daughter Aaradhya. The trio gave a twist to rakhi and tied 'love' bands to each other. "The best love-bandhan of all. Thank you my darling Aaradhya from mom and me. Love you eternally," Aishwarya captioned one of her posts, which is a picture of their hands with the bands. (So cute na?). In another picture, Aishwarya and Aaradhya share the frame with Vrinda Rai. "Love," wrote Aishwarya. Aaradhya, 6, was dressed in a traditional Indian wear for the festival and looked cute while Aishwarya appears to be wearing a white salwar suit.

A post shared by AishwaryaRaiBachchan (@aishwaryaraibachchan_arb) on Aug 27, 2018 at 8:27pm PDT

A post shared by AishwaryaRaiBachchan (@aishwaryaraibachchan_arb) on Aug 27, 2018 at 8:23pm PDT

A post shared by AishwaryaRaiBachchan (@aishwaryaraibachchan_arb) on Aug 27, 2018 at 8:17pm PDT

Meanwhile, another picture of Aaradhya celebrating rakhi with Aishwarya's brother's sons, is doing the rounds on social media. Little Aaradhya adorably feeds a sweet to her cousin with the help of mom Aishwarya.

Aishwarya is married to actor Abhishek Bachchan. He shared a throwback picture with sister Shweta on rakhi.

Partners in crime since the days of matching pajamas! Happy Rakhi Shwetdi! Love you. #RakshaBandhan #BrothersandSisters

Shweta also shared a couple of pictures from the festival, also featuring her children Navya Naveli and Agastya.

On the work front, Aishwarya and Abhishek Bachchan have reportedly signed Gulab Jamun, a film to be produced by Anurag Kashyap. Abhishek is right now busy with Manmarziyaan promotions, which is directed by Mr Kashyap. In Manmarziyaan, Abhishek, co-stars with Taapsee Pannu and Vicky Kaushal. Meanwhile, Aishwarya was last seen in Fanney Khan.