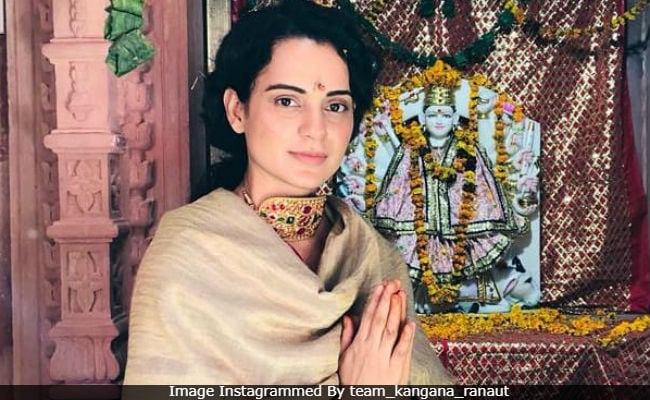 Actress Kangana Ranaut visited Shakti Temple in Himachal Pradesh, her home state, with her family on Thursday, ahead of her much-awaited film Manikarnika: The Queen Of Jhansi's release. Her sister Rangoli Chandel and nephew Prithvi Raj also accompanied the Ranauts to the temple. The pictures from Kangana's visit have been shared by Rangoli and also by the actress' official fan club on Instagram. Kangana wore a green Indian outfit to the temple, along with a light brown dupatta. She accentuated her look with a golden choker and matching bangles. The picture shared by Rangoli features them with the family and little Prithvi Raj is cradled in his maasi's arms while the other post is a solo photo of Kangana in front of the Goddess' idol.

Kangana Ranaut's Manikarnika: The Queen Of Jhansi is slated to release on January 25. The film is a biopic on Rani Laxmi Bai and Kangana plays the titular. The 31-year-old actress has also directed a few portions of the film, along with starring in it.

Of the film's release, Kangana earlier told news agency IANS, "I think God has been kind and I am happy doing both roles. We are very excited for the release of the film. We just can't wait to present the film in front of the audience."

Manikarnika: The Queen Of Jhansi also stars TV actress Ankita Lokhande as Jhalkari Bai. It is her debut Bollywood film.

Atul Kulkarni, Jisshu Sengupta and Danny Denzongpa are also part of Manikarnika: The Queen of Jhansi. The film's primary director is Krish.