After Sridevi's Death, Janhvi Kapoor's Dhadak Co-Star 'Worried About Her' 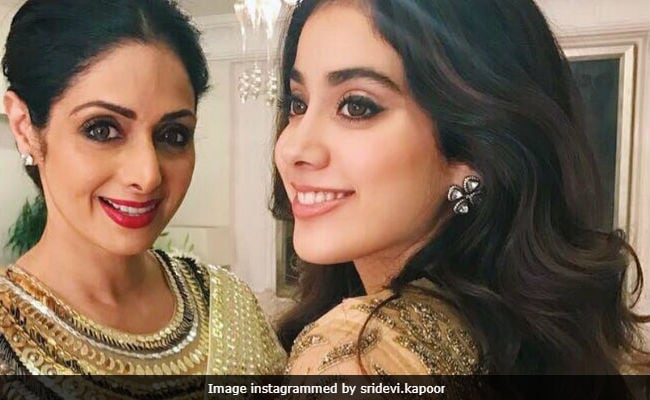 New Delhi: Actress Shalini Kapoor, who plays Janhvi Kapoor's onscreen mother in Dhadak, told news agency IANS that after Sridevi's death, she is "worried about (Sridevi's) daughters." Shalini told IANS that she learnt about the bond Janhvi shared with Sridevi while they were filming Dhadak and that "it really can't be described in words." Shalini Kapoor said: "My thoughts are with her family and admirers. But I'm more worried about her daughters. I am playing mom to her elder daughter Janhvi. I have learnt about the love between her and Sridevi. That really can't be described in words. My heart goes out to her. May Sridevi ji's soul rest in peace." Dhadak is Janhvi's Bollywood debut film.

Last year, Sridevi told NDTV that Janhvi often styled her for public appearances. "We're like friends, sharing each other's thoughts and it's really fun to get ready. She is always there for me," the actress added.

Sridevi had accompanied Janhvi to the sets of Dhadak when the film went on floors initially. In an interview during the promotion of her last film MOM, Sridevi told NDTV that she knew Janhvi would be an actor someday. "When she was a child, a family friend asked Janhvi what would she want to become and she said a doctor. I was very happy to hear that but she immediately added she would want to be a doctor in a film. So, I got the message," she had said in July 2017.

Talking about how she felt about Janhvi's first film, Sridevi had told news agency IANS in December 2017: "It is a great feeling. I am excited, nervous, happy and concerned, as any mother would be. But she is a very hard working and very dedicated girl."

Janhvi is one of the two high-profile Bollywood debuts of 2018. The other is that of Sara Ali Khan, daughter of Amrita Singh and Saif Ali Khan. Sara is a friend of Janhvi and she was one of the many from the film fraternity who visited Anil Kapoor's residence after Sridevi died.

A postmortem has revealed that Sridevi accidentally drowned in the bathtub of the Dubai hotel she was staying in on Saturday, Dubai Police said on Monday. She and other family members, including husband Boney Kapoor and younger daughter Khushi, were in Dubai for nephew Mohit Marwah's wedding. Sridevi was brought home on Tuesday night and she will be cremated today.