"What a lovely name!" exclaimed both Neha and Angad, who also added: "We will definitely keep that suggestion." 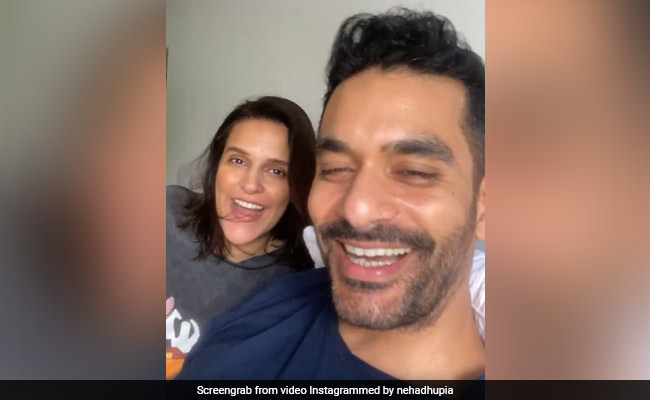 Star couple Neha Dhupia and Angad Bedi, who recently announced their second pregnancy, checked in on Instagram with a live session to thank their followers for showering them with congratulatory messages. Mid-way through their interactive session, the couple were asked if they already have name options in mind for their second baby, to which, Neha said suggestions are welcome. "Listen, we are more than happy. Please send us suggestions. Boy names... girl names... ," said Neha. Soon after, the couple visibly appeared excited when a user suggested the name "Gurmeher", if Neha and Angad have a daughter. "What a lovely name!" exclaimed both Neha and Angad, who also added: "We will definitely keep that suggestion."

Neha Dhupia and Angad Bedi are parents to daughter Mehr, who was born in 2018, just months after the couple had a low key wedding. Neha and Angad got married in a sudden and hush hush wedding in May 2018 at a gurudwara in Delhi. Later, they revealed they rushed with the wedding as Neha was pregnant.

On Monday, the couple announced their second pregnancy with this post on Neha Dhupia's Instagram: "Took us two days to come with a caption...The best one we could think of was ... Thank you, God. #WaheguruMehrKare," while Angad Bedi added: "New Home production coming soon...Waheguru mehr kare." Neha also shared an adorable photo, in which Angad can be seen cradling her baby bump with Mehr adorably joining the duo.