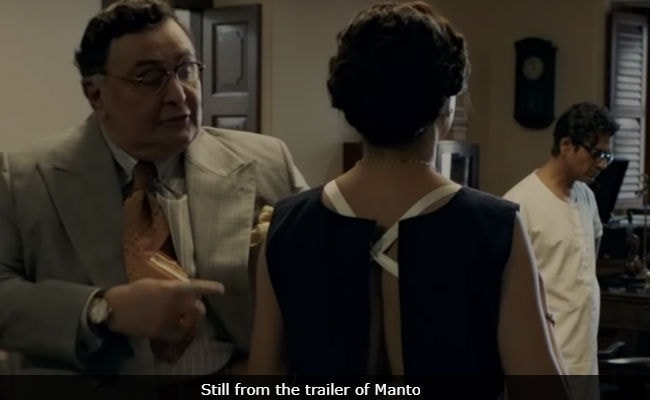 Rishi Kapoor plays the role of an "incorrigible sleazy "tharki" (flirt) film producer" in Nandita Das' Manto and he singled out the scene from the trailer, which released on the Internet today. Rishi Kapoor, who makes a cameo appearance in Manto, featuring Nawazuddin Sididqui in the title role, shared a screengrab from the two-and-a-half-minute clip, which featured him and wrote: "Played this incorrigible sleazy "tharki" (flirt) film producer in Manto along with the terrific Nawazuddin Siddiqui. Just a guest scene for dear Nandita Das. Don't miss the pants being worn nearly at the chest (the fashion those days-perhaps)" Noted, Mr Kapoor. Nawazuddin, who has been praised for his portrayal of the Pakistani writer from critics and the Internet, re-posted Rishi Kapoor's tweet and added: "Thank You very much Rishi Kapoor Sir. It is always an honour something coming from you. Loved your act."

Thank You very much @chintskap Sir, it is always an honour something coming from you. Loved your act :) https://t.co/0GZZj8Csjj

In April, Rishi Kapoor had dissed his short appearance in Manto saying he was "wrong" to have done the cameo. However, a week after he gave the interview to news agency PTI, the actor posted a damage-control tweet in which he said that he agreed to feature in Manto "just for the respect and admiration I have for her." He added: "Some mischief monger has tried to create a wedge between her and me. Absolutely untrue! I support the film." At that time, Manto was Cannes bound, where it competed in the Un Certain Regard category.

I have done one scene in Nandita Das's film "Manto" in a cameo. Just for the respect and admiration I have for her. Some mischief monger has tried to create a wedge between her and me. Absolutely untrue! I support the film and wish her all the best at Cannes Film Festival!

Rishi Kapoor reportedly filled the role that was meant to be played by Om Puri, after the actor's death last year.

In Manto, Nandita Das adapted the life of critically acclaimed and controversial writer Saadat Hasan Manto, who was tried for obscenity six times.

Watch the trailer of Manto: