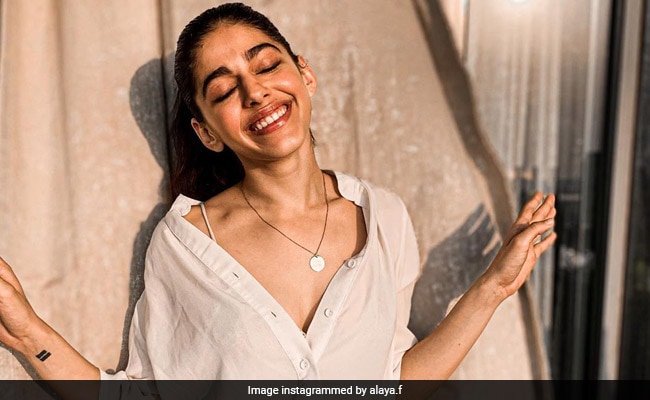 Alaya Furniturewalla often trends for her quirky videos and we love her for her Instagram feed. On Tuesday, Alaya Furniturewalla returned to light up her Instagram feed again with an uber cool video from her dance class. Alaya's video appears to be from the same day when an ROFL mishap over hair extensions happened at the dance class - she told us all about it but more on that later. This time, Alaya can be seen doing a backbend of sorts in her dance studio and setting major fitness goals. Making a reference to her previous dance class video, Alaya captioned the new one this way: "You guys enjoyed the fail version where I got my extensions pulled out so I thought it's high time I post the cooler one." LOL.

Earlier, the 22-year-old actress made a promise to herself that she's never going to go to her dance classes sporting hair extensions because she learnt it the hard way. "...And I never wore extensions to dance class again," she captioned a video, in which her hair extensions can be seen coming off as she slid off the floor.

...and I never wore extensions to dance class again😂 These reactions are priceless😂 @dimplekotecha @utkarshc21

Face puffiness has been my constant enemy and I've recently found the best solution to it! Here's my favourite homemade face mask/scrub, it'll reduce any puffiness, exfoliate your skin and leave it soft and glowwwwing✨ (it's also a great body scrub btw!)

There was a time in my life when I could do 46 push ups in one minute.. but these days my arms want to die after doing just 10. But since you guys chose the 50 push up challenge, I did my best😂 If you guys attempt this! Upload it and use the tag #ChallengingAF so I can see it!♥️

SOS: Send help or art sheets.. both will do me good😂

Alaya is the daughter of Pooja Bedi and her ex-husband Farhan Furniturewalla. Alaya made her Bollywood debut this year with Jawaani Jaaneman this year, in which she co-starred with Saif Ali Khan and Tabu.