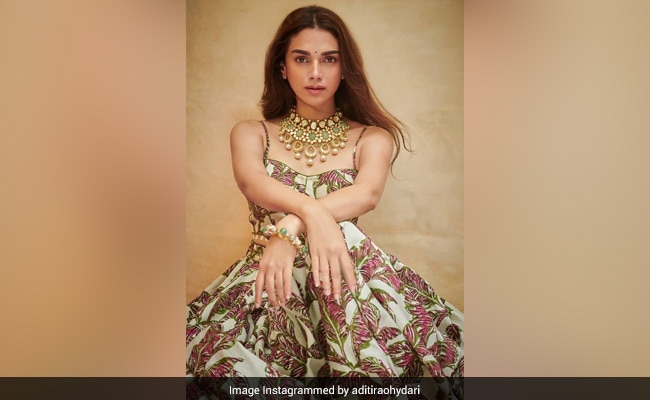 Aditi Rao Hydari never ceases to amaze fans with her beauty. In the latest pic, the actress is looking ethereal in a green and pink block printed bralette and skirt co-ord set. The makeup was minimal but her look stood out due to a tiny bindi. Fans were mighty impressed and filled the comments section with heart, fire and heart-eyed emojis. She wrote in the caption, "'Mandana' by @punitbalanaofficial." Fashion designer Punit Balana shared more pictures from the photoshoot.

He described Aditi's look from his Spring/Summer 2021 collection with Robert Frost's lines. Punit's Instagram caption read, "I have been one acquainted with the night. I have walked out in rain-and back in rain. I have outwalked the furthest city light." The designer added minute details of the ensemble.

Take a look at some more pictures from the photoshoot:

Earlier, the 34-old-year actress shared a series of snaps wearing a trendy pyjama. "Not ready to Monday," read the caption. Aditi was last seen in the movie The Girl On The Train, featuring Parineeti Chopra and Avinash Tiwary. Next, she has the Netflix anthology Ajeeb Daastaans. The four short films are helmed by Neeraj Ghaywan, Kayoze Irani, Shashank Khaitan and Raj Mehta. Aditi is also a part of the Tamil romantic comedy, Hey Sinamika. The Brinda directorial also stars Dulquer Salmaan and Kajal Aggarwal.