Can you spot a seagull in the background? 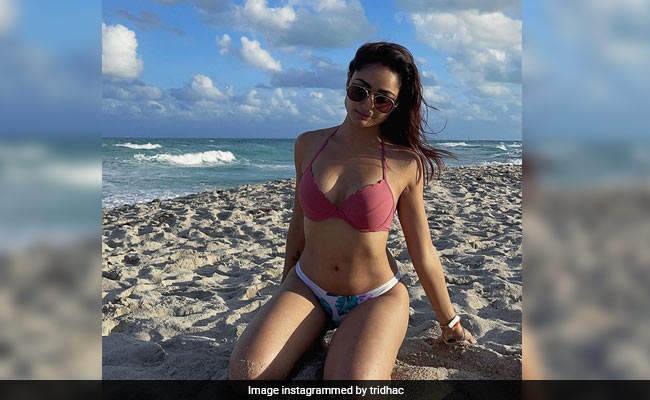 Ashram actress Tridha Choudhury set Instagram ablaze on Tuesday by sharing her "easy breezy" look from her Miami vacation. The actress, who loves travelling, often posts stunning pictures from her holidays. In her latest post, the actress can be seen chilling on the South Beach in Miami. She looks gorgeous in a red and white bikini. "Easy Breezy Japaneasy," Tridha Choudhury captioned her throwback photograph that is beautiful in every way. A seagull in the background enhanced the aesthetic of the picture. Tridha also added the hashtags like #miamiflorida #miamilife #southbeachmiami and #fitnessbody to her caption.

The reason we said that the aforementioned picture is a throwback because in June, Tridha Choudhury posted a somewhat similar photo from the South Beach. See here:

Last week, Tridha Choudhury trended a big time on social media after she shared this picture of herself from Seychelles. "She was temptation wrapped in casual elegance - Christine Feehan," she captioned the photo. Check it out here:

Tridha Choudhury has featured in Hindi and Bengali movies. She made her film debut with Srijit Mukherji's 2013 film Mishawr Rawhoshyo. She ventured into the television industry with Star Plus series Dahleez. The actress has worked in over 5 Bengali films - Jodi Love Dile Na Prane, Khaad, Merry Christmas, Khawto and Shesh Theke Shuru. She will next be seen in Ranbir Kapoor's Shamshera.

Tridha was last seen in the second season of Bobby Deol's web-series Ashram, in which she co-starred with Aditi Sudhir Pohankar among others.