"He is supportive of my decisions. What I am now is because of the love he has for me," said Amala 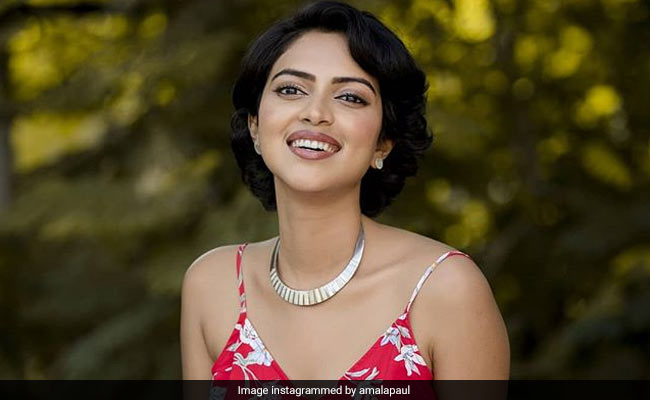 Actress Amala Paul revealed in an interview with The Indian Express that she is dating somebody, that her current relationship has helped 'heal' her and that she would like to start a family. The 27-year-old star, last seen in Aadai, did not reveal the identity of her partner. "Yes, I am seeing someone. I would love to get married, have a baby and adopt one," she said in the interview. Amala Paul, who is divorced from filmmaker A L Vijay, also said, "I feel calmer and more secure now. This is the best phase of my life."

Fans might not agree but Amala thinks she used to be a 's****y actor.' She told The Indian Express, "I shared the Aadai script with him and he told me I needed to work on myself. Guess what he told me after watching my films? I was a shitty actor. He is supportive of my decisions. What I am now is because of the love he has for me. His love healed me. He is such a cool guy!"

Amala Paul married A L Vijay in 2014; in 2016, reports emerged that the marriage was over and that it was because of the actress' immense success. A L Vijay's father A L Azhagappan told Tamil TV channel Sathiyam TV that Amala Paul "has been committing many movies after their marriage that had led to issues between them as Vijay didn't like it. She had then decided not to commit any more films. However, she is now on a signing spree and acted in Suriya's Pasanga 2, Dhanush's Amma Kanakku and his upcoming film Vada Chennai. We can't take it anymore and even talked to her parents, but she was not even listening to us. I am not sure what Vijay has told her regarding this, but our son is important for us. The news you heard about them getting divorced is 100% true and will be done legally."

Amidst the outraged criticism that followed his father's deeply sexist - and completely oblivious - revelation, Vijay said in a statement that he had not asked Amala to stop working and that he had always "women in (his) films with dignity and respect."

Amala Paul and A L Vijay were officially divorced the next year.

Amala Paul's new film Aadai, featuring a controversial nude scene, released this month. The teaser of the Tamil-language film went viral in June, with several celebrities such as Samantha Ruth Prabhu and Karan Johar giving Amala a shout-out and describing her as 'bold, beautiful and badass.'

In case you haven't watched the teaser of Aadai yet, take a look:

And here's what Samantha and Karan Johar tweeted about Amala Paul:

'Freedom is what you do with what's been done to you.' Presenting #Aadai a Tamil film that breaks the shackles of the status quo. Starring the bold, beautiful & badass @Amala_ams. Directed by @MrRathna produced by @vstudiosoffl@thisisoorka @vijaykartik_khttps://t.co/yvfV17ezcG

Amala Paul has worked in Malayalam, Tamil and Telugu films such as Sindhu Samaveli, Mynaa, Naadodigal and Deiva Thirumagal. After Aadai, her line-up of films include Adho Andha Paravai Pola, Aadjeevitham and Cadaver.