Sharing an update of her current mental state, Ira Khan said: "I am okay but I'm also crying a lot." 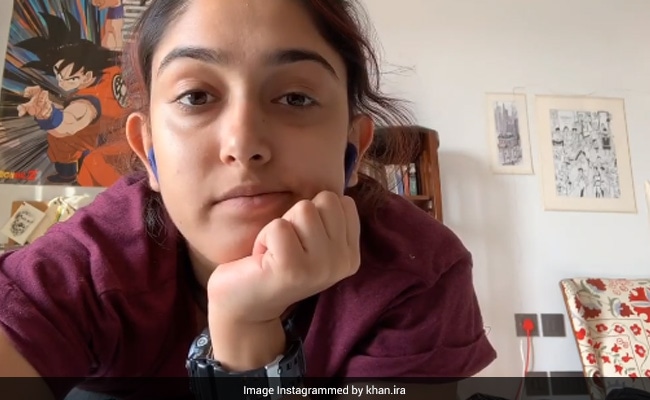 Ira Khan in a still from her video (courtesy khan.ira)

Aamir Khan's daughter Ira Khan, who revealed she's been battling depression last year, shared an update on her mental health in an Instagram video. Adding a trigger warning in the caption, she wrote: "It's not a happy, positive video. It's not an unhappy, negative video either. But I'm... blah and if you're low, it may or may not be the best thing to watch. You be the judge." Ira said she wanted to post regular videos to help her fans understand the experience of dealing with depression but her new job kept her pre-occupied. Ira revealed she's going through a low phase of late and summed up her days with these words: "I would come home and cry".

Ira Khan said her low phase coincided with the festivities of her cousin Zayn Khan's wedding in Alibaug, which she attended with her father Aamir Khan. "I can be seen smiling in all the wedding photos... but I hit a burn out. And I didn't have enough time to deal with my burn out. So, I would work and work and work, come home and cry and then wake up and rush to work," she said in her video.

"I wanted to be part of the wedding. I didn't want to just be in bed and cry. But I slept a lot. Feel bad for not being as involved as I wanted to be... I can be happy for their wedding and still feel like absolute c***," she added.

Sharing an update of her current mental state, Ira Khan said: "I am okay but I'm also crying a lot."

On World Mental Health Day last year, Ira Khan revealed she's been battling depression for over four years. "I have decided to take you on a journey - my journey - and see what happens. Hopefully, we'll get to know ourselves and understand mental illness slightly better," she began the video with these words.