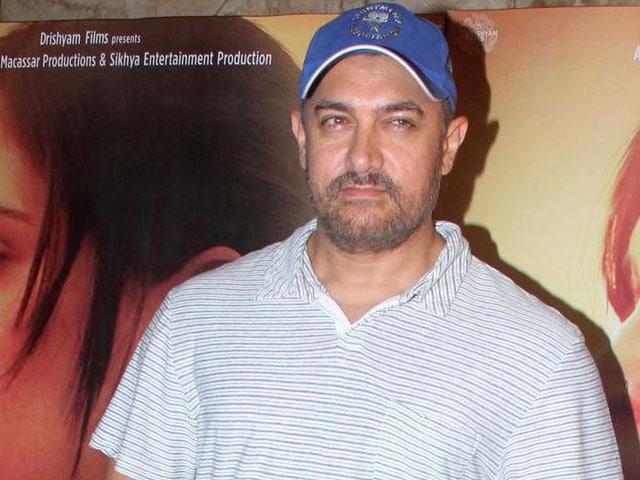 New Delhi: Actor Aamir Khan's face is literally mud in the first look of new film Dangal he tweeted on Monday and while it didn't send the nation reeling as his first poster of PK did, it did have social media sniggering. Since Twitter finds anything Aamir hard to resist these days, cue the jokes. (Also Read - First Look: A Very Muddy Aamir Khan in Dangal)

As you cannot possibly fail to know by now, 50-year-old Aamir now weighs 95 kilos and is playing wrestler Mahavir Phogat, which explains the mud (or does it?) (Also Read: Aamir Khan's 95 Dangal Kilos Are Giving Him Real Trouble)

Twitter quips included this one from comedian Kanan Gill:

Guys I think Aamir Khan's face is in my chocolate ice cream pic.twitter.com/Ll5c7VQ3cC

Do you still want that ice cream then? More jokes:

Brief : 'We need a groundbreaking poster for Dangal' pic.twitter.com/v4LYMFLisb

#Dangal looks like the story of every Indian road after it has rained for 30 mins.

Several references were made to Aamir's weepiness while watching films (other people's):

Most amazing part about 'Dangal' poster is that Aamir is not crying in it! pic.twitter.com/Paf5wBiQTw

Don't be so sure about that:

We believe we might be able to help with the above question. In an interview to Hindustan Times last week, Aamir said, "I read all the jokes. I was reading them and laughing. I don't remember the jokes now, but there were some really good ones. I quite enjoyed all the attention." (Also Read: Aamir Khan Explains His Katti Batti Tears, Bajrangi Bhaijaan Towel)

Jokes apart, Dangal is now filming in Ludhiana and will release next year. It will be Aamir's first film since 2014's blockbuster PK.