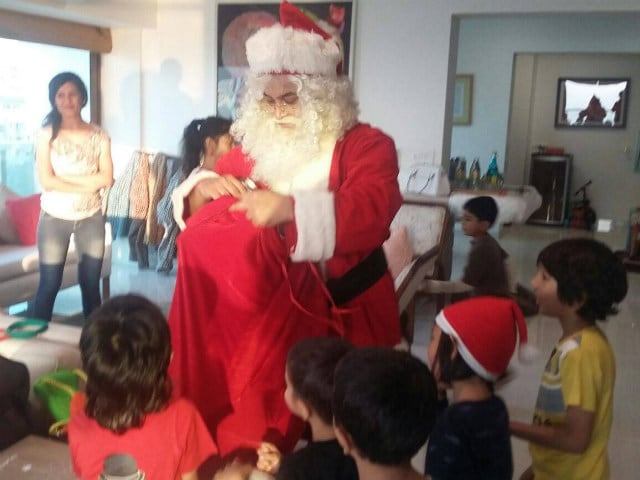 This image was posted on Facebook by Aamir Khan

The PK star shared images of him dressed as Santa Claus in a red suit, white beard and hair and bag of presents. (Also Read: Aamir's Son and Imran's Daughter Make a Cute 'Baby Sandwich' in This Pic)

He was photographed handing over goodies to his four-year-old son Azad and his friends. Santa also had a hug for the children and a wish for 'everyone'.

Just finished playing Santa at home for all the kids at our annual Christmas party. Merry Christmas everyone. Love. a.

Meanwhile, the Ghulam actor will next be seen in Dangal, where he will portray the role of former wrestler Mahavir Singh Phogat.

Directed by Nitesh Tiwari, Dangal is jointly produced by Aamir, his wife Kiran Rao and filmmaker Siddharth Roy Kapur. It also stars Sakshi Tanwar, Rajkummar Rao and Sanya Malhotra in significant roles. Dangal is slated to release on Christmas in 2016.