"The criteria of being a good actor is the same, whether you're a child or an adult. You have to be the part, be the character and be able to deliver that. So the criteria is the same," said Aamir 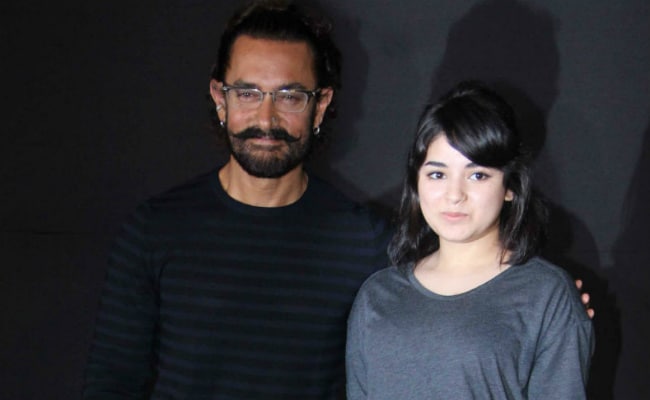 Aamir Khan and Zaira Wasim are co-stars of Dangal

New Delhi: Aamir Khan has found Bollywood's secret superstar in Zaira Wasim, who is his Dangal co-star and the lead actor in the Advait Chandan-directed movie. The 52-year-old superstar also features in the upcoming movie Secret Superstar - he plays a creepy music director named Shakti Kumaarr while Zaira plays an aspiring rockstar Insiya. Talking about the younger generation of new actors in Bollywood and Zaira in particular, Aamir said: "These kids are so bright and intelligent. Zaira, for me, if you ask me who is the finest actor in the Hindi film industry today, I would say Zaira. She's absolutely amazing." Aamir was speaking at the Global Indian International School in Singapore, where he was to promote the film, reported IANS.

"There's a very famous quote by a Hollywood personality 'Never work with animals and children, because they steal the scene away from you and as an audience your heart goes out to them'," Aamir added.

Aamir also mentioned child actor Darsheel Safary while elaborating on the subject: "The criteria of being a good actor is the same, whether you're a child or an adult. You have to be the part, be the character and be able to deliver that. So the criteria is the same. I had a wonderful experience working with, whether it was Darsheel Safary in Taare Zameen Par or Zaira in Dangal or even Kunal Kemmu in Hum Hain Rahi Pyar Ke," he said.

Nitesh Tiwari's Dangal, which released last year, cast Fatima Sana Shaikh and Sanya Malhotra as the two Phogat sisters while Zaira and Suhani Bhatnagar played the younger version of the wrestler sisters. Ahead of Dangal's release, Aamir had everything good to say about the younger lot: "If I have to rate our performance in the film, I would say that these kids performed ten times better than what I did. No, I am not exaggerating anything. Once the film releases, the audience will understand. I have been working in the industry for last 25 years, but these kids are highly talented," he told IANS.

Promoted
Listen to the latest songs, only on JioSaavn.com
Aamir Khan is currently busy with promotional duties for Secret Superstar, which is scheduled to hit screens on October 19.