Yami Gautam Has Big Love For Her "Cutest Co-Actors" 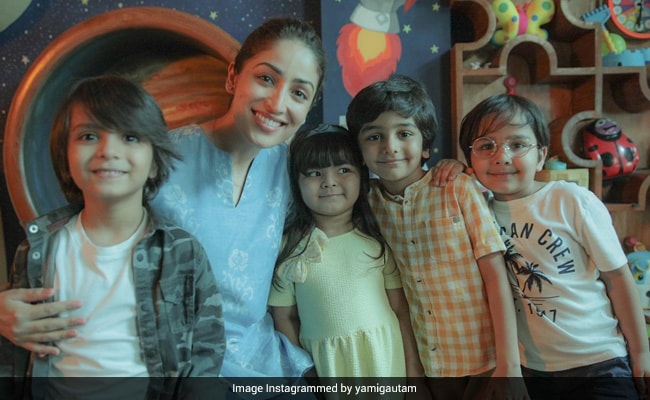 Yami Gautam's performance in A Thursday has struck a chord with the viewers. Apart from her on-screen acting skills, here's something more that we love about Yami Gautam. She is dropping one appreciation post after another on Instagram. This time, she gushed about the child actors with whom she shared the screen for her latest movie. Yami Gautam has posted a set of behind-the-scenes photos and videos from the sets. We see Yami Gautam hugging her "cutest co-actors" and spending fun moments with them. In one video, she is also putting makeup on one of the kids.

Here's what Yami Gautam had to say about her experience. "Cutest co-actors I ever got to work with. A Thursday was not that set for me where I would even think about taking any images or BTS. Stepping in Naina's shoes was way more challenging than I had imagined while preparing for the part. But somewhere these little kids came in as a breather… so this is what my day looked like in those rarest of the rare moments," she wrote.

Yami Gautam also left an appreciation post for her sister Surilie Gautam on Instagram. Surilie praised Yami Gautam for her role in A Thursday by writing, "Endless kisses for my brightest for your spectacular performance in A Thursday. Nobody could have done it the way you have. I am so proud of you." The actress reposted it and wrote, "To the best sister, my cheerleader, my friend, 1 of my pillars of strength…forever and ever… my one and only Surilie… I love you so much."

Yami Gautam's A Thursday has made quite a buzz among fans and critics alike. Her performance is worth all the praise. Now, here's a note that really grabbed our attention. Why so? Yami Gautam's husband Aditya Dhar is the person behind it. That's not all. There is a twist. Watching Yami in the role of a kidnapper, he tweeted, "Suddenly scared of sharing a home with you Yami Gautam." To this, the actress replied "Hahaha. Nothing to be scared of... see you at home soon."

Yami Gautam has Akshay Kumar's Oh My God 2 next in her lineup.