"'Tis the time to be jolly," wrote Shilpa Shetty 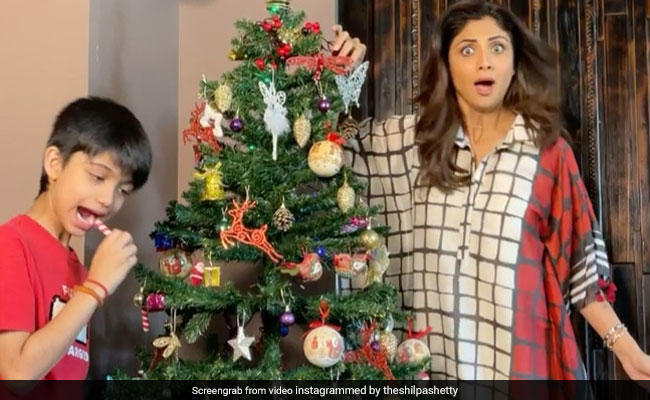 Shilpa Shetty, who often delights her Instafam by sharing posts from different facets of her life, posted a goofy albeit super cute video on her profile, which also features her son Viaan Raj Kundra. In the video, the mother-son duo can be seen happily posing next to a Christmas tree that they decorated together (as revealed by Shilpa in her post). She captioned the post: "Viaan thought the candy cane was yum. Whoever said it was easy being a mum. Decorating the tree together is our favourite tradition; 'Tis the time to be jolly." In the video, Shilpa can be seen dressed in an outfit by her own clothing line DreamSS. She added the hashtags #MotherSon, #ChristmasTree, #presents, #happiness, #DreamWithMe among others.

Shilpa Shetty married businessman Raj Kundra in 2009. The couple are parents to son Viaan and a daughter named Samisha. In terms of work, she was last seen as one of the judges on the TV reality show Super Dancer Chapter 3, alongside choreographer Geeta Kapoor and filmmaker Anurag Basu. The actress will next be seen in Sabbir Khan's upcoming film Nikamma. The actress recently shot for her forthcoming film Hungama 2 in Manali, in which she will co-star with Paresh Rawal, Meezaan Jaaferi and Pranitha Subhash.

Shilpa Shetty, who made her Bollywood debut with the 1993 thriller Baazigar (which also featured Kajol and Shah Rukh Khan in the lead roles), is best-known for her performances in films such as Main Khiladi Tu Anari, Dhadkan, Life In A...Metro and Apne, to name a few.