A Pic From Abhishek And Aishwarya Rai Bachchan's Wedding? Nah, It's "Photoshopped," He Tweets

If you think you can post a morphed picture of Abhishek Bachchan and his wife Aishwarya Rai on social media and get away with it, you're wrong 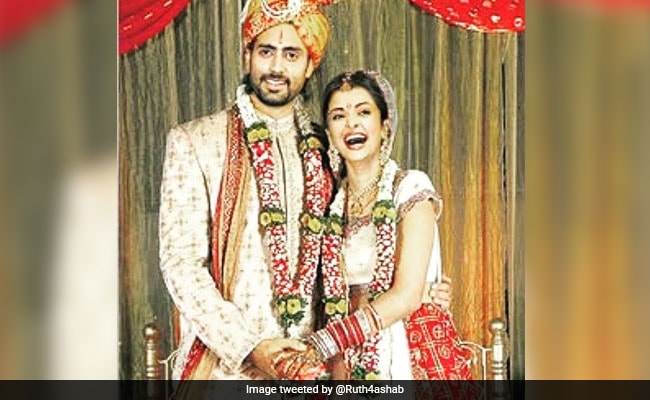 If you think you can post a morphed picture of Abhishek Bachchan and his wife Aishwarya Rai on social media and get away with it, you're wrong. Wondering what are we talking about? On Thursday, a fan of Aishwarya Rai Bachchan, who married Abhishek in April 2007, posted a "photoshopped" image of the actress and her husband, calling it a throwback picture from their wedding festivities. However, her tweet caught the attention of Abhishek, who often engages with his fans on Twitter, and what followed next must have been a facepalm moment for the user. In the comments section of the tweet, in which the user wrote "her laugh and his smile say it all" alongside the morphed photo of the duo, Abhishek Bachchan wrote: "This is a photoshopped image" with a folded hands icon.

See the aforementioned tweet and Abhishek Bachchan's reply to it:

This is a photoshopped image.

Abhishek Bachchan and Aishwarya Rai, co-stars of films like Kuch Naa Kaho, Umrao Jaan, Dhoom 2, Dhaai Akshar Prem Ke, Sarkar Raj, Raavan, Guru and Bunty Aur Babli, got married on April 20, 2007 in Mumbai. It was an intimate wedding ceremony that took place at one of the Bachchans' bungalows - Prateeksha. The couple welcomed their first child, daughter Aaradhya, in 2011.

We know after checking out the "photoshopped" picture of Abhishek and Aishwarya, you now want to see real pictures from the duo's wedding. Don't worry, we have collected a few pictures from their wedding festivities for you, take a look:

In terms of work, Aishwarya Rai Bachchan was last seen in the 2018 musical film Fanney Khan, co-starring Anil Kapoor and Rajkummar Rao. Her next project is Mani Ratnam's upcoming movie Ponniyin Selvan. Aishwarya will also be seen in Anurag Kashyap's Gulab Jamun, in which she will co-star with her husband Abhishek Bachchan.