"I'm going to Photoshop me and V (her husband Vinayak Reddy) in this at some point," wrote Rana's cousin Aashritha Daggubati 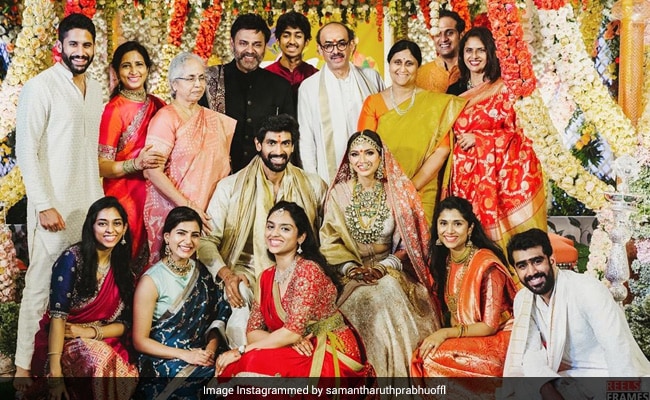 Miheeka and Rana photographed with their family. (courtesy: samantharuthprabhuoffl)

Samantha Ruth Prabhu took us to Rana Daggubati and Miheeka Bajaj's dreamy wedding in Hyderabad by sharing a perfect photograph of the couple along with their family, on her Instagram profile. Samantha shared a star-studded picture featuring the bride and the groom along with Suresh Babu, Venkatesh Daggubati, Naga Chaitanya, and other family members and she welcomed Miheeka to the family. "The most adorable Miheeka...Welcome to the family," wrote Rana's sister-in-law Samantha Ruth Prabhu. Rana's cousin and food blogger Aashritha Daggubati, who couldn't attend the ceremony on Saturday, in the comments section of Samantha's post, wrote: "Picture perfect! I'm going to Photoshop me and V (her husband Vinayak Reddy) in this at some point."

A post shared by Samantha Akkineni (@samantharuthprabhuoffl) on Aug 8, 2020 at 12:39pm PDT

Besides members of the Daggubati family, Rana's best friend Ram Charan and his wife Upasana, and actor Allu Arjun, were among the 30 guests who received invites. Sharing a picture with the bride and groom on her Instagram profile, Upasana wrote: "Congratulations Rana and Miheeka. Now we'll all live happily ever after."

A post shared by Upasana Kamineni Konidela (@upasanakaminenikonidela) on Aug 8, 2020 at 9:42am PDT

Meanwhile, Ram Charan posted these pictures with the Baahubali actor and he captioned the post: "Finally my hulk is married. Wishing Rana Daggubati and Miheeka a very happy life together."

Finally my hulk is married wishing @ranadaggubati @miheeka a very happy life together!!

Rana Daggubati and Miheeka Bajaj got married in a private ceremony in Hyderabad on Saturday, which was attended by only a few family members. Here are the pictures from Rana and Miheeka's wedding :

Rana Daggubati, best-known for playing Bhallaladeva in the Baahubali series, made his acting debut with the 2010 Telugu film Leader. The actor stepped into the Hindi film industry with the 2011 film Dum Maaro Dum and went on to feature in several Telugu, Tamil and Hindi films such as Naa Ishtam, Department, Krishnam Vande Jagadgurum, Arrambam, Baby, Bangalore Naatkal, Housefull 4, Baahubali: The Beginning, Baahubali: The Conclusion and The Ghazi Attack. Miheeka Bajaj runs an interior decor and event business called Dew Drop Design Studio.