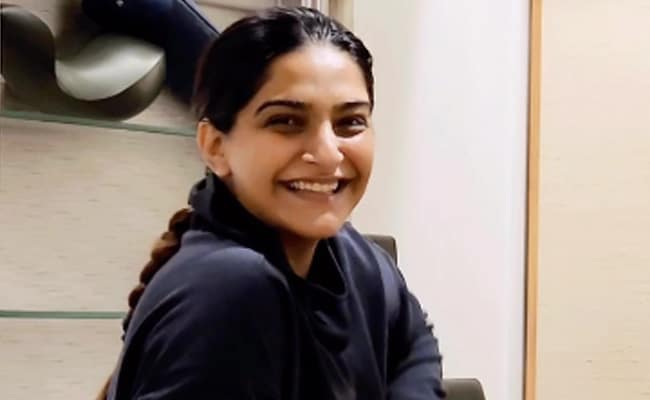 A still from the video. (courtesy: sonamkapoor)

Sonam Kapoor has shared a glimpse of her “working mom life”. It is a video that talks about Sonam's fitness journey after giving birth to her son Vayu. The clip opens to a black screen with the text, “60 days after Vayu”, written on it. In the next frame, we see Sonam performing a variety. She then says, “Working mom's life is a constant state of exhaustion but at the same time bliss and excitement.” Sonam also mentions how her husband Anand Ahuja made electrolyte drinks for her. On her daily routine, Sonam adds, “Meeting, then feed, then another meeting, then feed, eat, sleep and then pump.” Along with the clip, Sonam wrote, “Let's Begin. #KeepitrealwithSonam Thank you Radhika Karle for taking me through my pregnancy and now helping my postnatal journey. Gentle Birth Method and you have been instrumental in keeping me fit throughout.”  Of course, Anand Ahuja was the first one to drop a comment under the post. He, just like us, couldn't stop smiling. “So cute. Was smiling throughout the video.” Sonam's sister Rhea Kapoor wrote, “Yesss you got this.” Rhea's husband, Karan Boolani dropped a bunch of clap emojis under the post. Anil Kapoor followed suit.

Sonam Kapoor and Anand Ahuja welcomed their first child Vayu on August 20. At that time, the couple wrote, “On 20.08.2022, we welcomed our beautiful baby boy with bowed heads and hearts. Thank you to all of the doctors, nurses, friends and family who have supported us on this journey. It's only the beginning but we know our lives are forever changed - Sonam and Anand."

Sonam Kapoor and Anand Ahuja got married in April 2018 in Mumbai.