Sharing the blast from the past, Jackie Shroff, who played the titular role in the film, wrote: "Thank you Guddu ji (Rakesh Roshan) for casting me in such an endearing film which has always been so close to my heart" 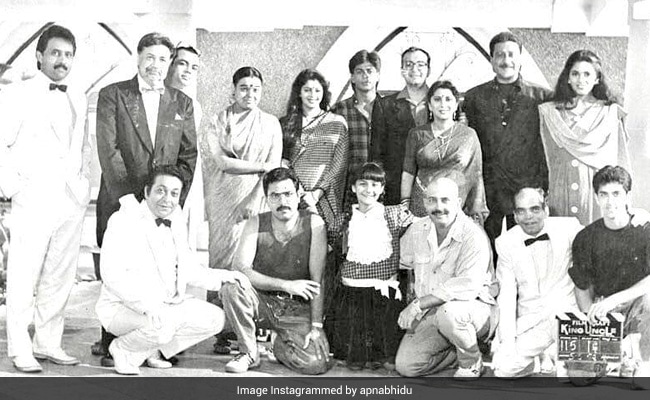 On the 28th anniversary of his hit film King Uncle, Jackie Shroff posted a throwback gem on Instagram and it is quite special. Why, you ask? Well, it features Jackie Shroff posing for a group picture with Hrithik Roshan and his King Uncle co-stars Shah Rukh Khan, Paresh Rawal, Anu Agarwal, Pooja Ruparel and director Rakesh Roshan, among many others. The black and white memory from the sets of the film, which opened in theatres on February 5 in 1993, also shows stars Nivedita Joshi, Nagma, Sushmita Mukherjee, Dinesh Hingoo and late actor Deven Verma. A much younger version of Hrithik Roshan, son of Rakesh Roshan, can be seen holding the clapboard of the film in his hand in the photo.

Sharing the blast from the past, Jackie Shroff, who played the titular role in the film, wrote: "Thank you Guddu ji (Rakesh Roshan) for casting me in such an endearing film which has always been so close to my heart. #28yrsKingUncle."

Take a look at the amazing throwback photo here:

King Uncle shows the story of a wealthy industrialist Ashok Bansal (Jackie Shroff), who is quite strict with his younger brother Anil (Shah Rukh Khan) and sister Sunita (Nivedita Joshi). Fed-up of his brother's behaviour, Anil leaves the house and marries a poor girl named Kavita (Nagma). In the meantime, Munna (Pooja Ruparel), an orphan, arrives at Ashok Bansal's house and becomes his favourite, all thanks to her antics.

King Uncle was inspired by the 1982 Hollywood film Annie, based on the 1924 comic strip Little Orphan Annie.

After King Uncle, Shah Rukh Khan and Jackie Shroff went on to work together in films like Devdas and Trimurti. Shah Rukh and Hrithik Roshan's Kabhi Khushi Kabhie Gham... is a blockbuster.