A Glimpse Of Pulkit Samrat's "Quarantine Diaries" With Kriti Kharbanda

"A page from the quarantine diaries," wrote Pulkit 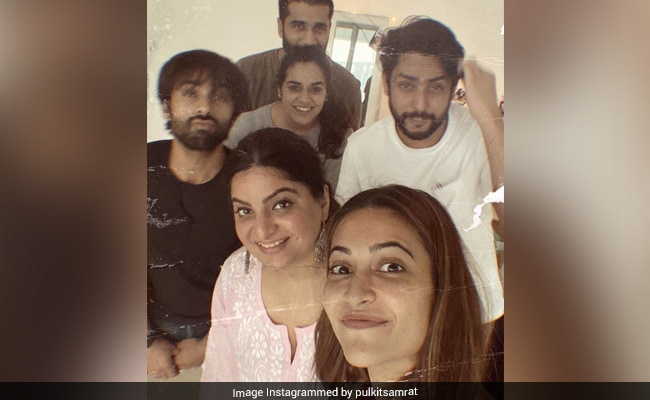 Pulkit Samrat just drove our lockdown blues away. The 36-year-old actor just dropped a super cute group picture featuring his friends and girlfriend Kriti Kharbanda and it is making his Instafam swoon. In the picture, Kriti can be seen smiling with all her hearts as she clicks the picture. Pulkit's friends can be seen posing for the camera. Pulkit, who keeps sharing glimpses of his quarantine diaries, just shared another snippet of his quality time with his girlfriend and friends."A page from the quarantine diaries," wrote Pulkit Samrat. Take a look at the aforementioned post here:

A page from the #QuarantineDiaries

Pulkit, who is currently at home with his girlfriend Kriti Kharbanda, keeps painting Instagram red with their loved-up posts for each other. A few days back, Pulkit shared an adorable video of Kriti Kharbanda playing Bella Ciao on the piano with her eyes closed. "Bella Ciaoto banta hai! Dhyaan se dekhiye.. dono aankhein khol ke! ," wrote Pulkit. Tale a look:

Pulkit Samrat shared this video of Kriti Kharbanda busy in the kitchen. He referred to her as his "personal chef." Aww. Take a look:

Earlier, Kriti and Pulkit trended a great deal for their loved-up post of giving champi to each other. Ktiti shared a video with Pulkit and wrote, "First I made him look like Champak, then made him give me a champi! Pulkit Samrat, heya! Thanks ya," wrote Kriti.

First I made him look like Champak, then made him give me a champi! @pulkitsamrat heya! Thanks ya! #quarantinememories #yelocozyolo (this is officially my new motto in life)

Kriti Kharbanda confirmed about her relationship with Pulkit Samrat in an interview with ETimes, last year. Kriti told the publication, "We are dating each other... In all honesty, I wanted my parents to know first that I'm dating someone... But I'm in a very happy place and I have no qualms admitting that I am dating Pulkit Samrat."

On the work front, Pulkit and Kriti were last seen in the 2019 action-comedy Pagalpanti where they shared screen space with Anil Kapoor, John Abraham, Ileana D'Cruz, Arshad Warsi and Urvashi Rautela.

Paatal Lok's Gul Panag Currently Looks Like This (After 5 Weeks Of Work-Out, Managing House, Baby And Work From Home)