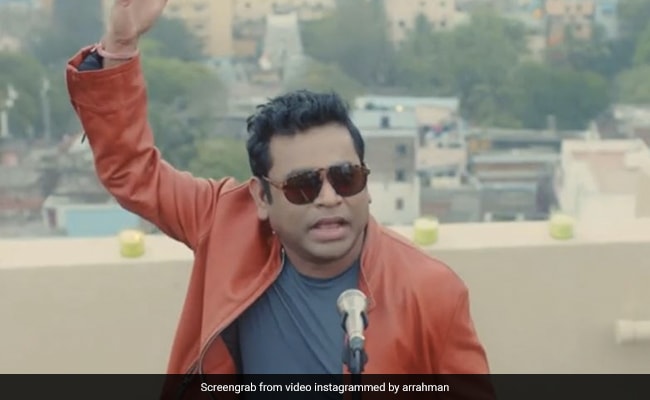 Legendary music composer and singer AR Rahman is here to brighten your day with his new video amid the coronavirus pandemic. On Thursday, AR Rahman, who produced and co-wrote the recently released musical film 99 Songs, posted a video of his latest medley on Instagram. AR Rahman's clip is a musical treat for his Instafam. AR Rahman recorded this clip with the 99 Songs team on the roof of a building in Chennai. In the video, we can see AR Rahman jamming with actors Ehan Bhat and Edilsy Vargas. Both Ehan and Edilsy made their respective acting debuts as leads in 99 Songs. Film's director Vishwesh Krishnamoorthy is there too. Playback singers Benny Dayal and Rakshita Suresh along with music producer Kumaran Sivamani are also featured in the clip.

In the video, AR Rahman took us back to a few of his iconic songs such as Rang De Basanti, the title track of Rang De Basanti (2006) and Balleilakka which featured in Sivaji: The Boss (2007). He also included tracks such as Veere Kadh De and O Aashiqa from 99 Songs in the musical composition.

In his caption, AR Rahman wrote, "Hope. All of us have come together to lighten your mood. So don't lose hope, there is still beauty in this world. Enjoy this."

Rakshita Suresh, who has sung songs like Kannalane Enadhu Kangal from Bombay (1995) and Bolna Mahi Bolna from Kapoor And Sons (2016), dropped a comment on AR Rahman's post. The singer thanked him for making her a part of the medley. She wrote, "This was so much fun, Sir. Thank you for making me a part of this super-cool video."

On April 11, AR Rahman had shared a sneak peek of the medley video on his Instagram handle. In the picture, AR Rahman can be seen posing with his team. Take a look at his post here:

99 Songs hit the screens on April 16 this year. It was released in Hindi, Tamil and Telugu. Apart from newcomers Ehan Bhat and Edilsy Vargas, the film also featured actors like Manisha Koirala, Lisa Ray, Aditya Seal and Warina Hussain. Musicians Rahul Ram and Remo Fernandes were also a part of the movie.

The film 99 Songs depicted a story of a struggling singer who wants to be a successful composer. The film was premiered at the 24th Busan International Film Festival in 2019. AR Rahman produced the movie under his banner YM Movies. He also composed its soundtrack and background score.