The film MOM "Will always be remembered for the National Award-winning performance of Sridevi," wrote Boney Kapoor 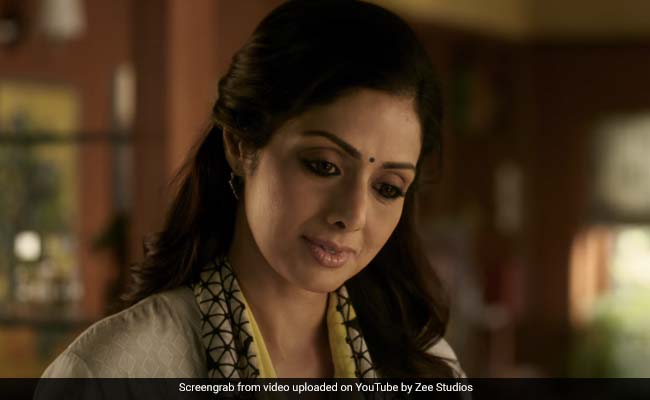 July 7 will always be special for Boney Kapoor, who produced MOM - his late wife Sridevi's last film. Today, MOM clocked three years, prompting an emotional tweet from Boney Kapoor, who wrote Sridevi's brilliant performance is what made MOM a memorable film of all times. Sridevi's MOM hit screens and impressed the audiences and critics alike in died in July 2017 and almost a year after that her tragic death left the film fraternity shocked. "How time flies... it's three years since the release of MOM. Will always be remembered for the National Award-winning performance of Sridevi. And the entire cast and team's stellar performance and hard work," wrote Boney Kapoor, also acknowledging the efforts of the film's team and the supporting cast, including that of actors Nawazuddin Siddiqui, Akshaye Khanna, Sajal Ali, Adnan Siddiqui, and director Ravi Udyawar.

How time flies.....it's 3 years since the release of Mom. Will always be remembered for the National award winning performance of @SrideviBKapoor. And the entire cast and teams stellar performance and hard work #AkshayKhanna@Nawazuddin_S@Iamsajalali@adnanactor@raviudyawarpic.twitter.com/kgoMPQen03

For her performance in MOM, Sridevi was posthumously honoured with the Best Actress National Award in 2018 - her first National Award. Sridevi, who is often addressed as Bollywood's "first female superstar," starred in 300 films during a career spanning over five decades. Sridevi's last onscreen appearance was in Shah Rukh Khan's Zero - her portions were shot before her death.

Sridevi's elder daughter Janhvi Kapoor is an actress, who made her debut with Dhadak in July 2018 and is also known for her performance in Netflix's Ghost Stories. Janhvi's sister Khushi is pursuing higher studies. On Sridevi's death anniversary this year, Janhvi Kapoor wrote: "Miss you every day." Janhvi often shares throwback memories of Sridevi, reminding us of her mother's legacy.