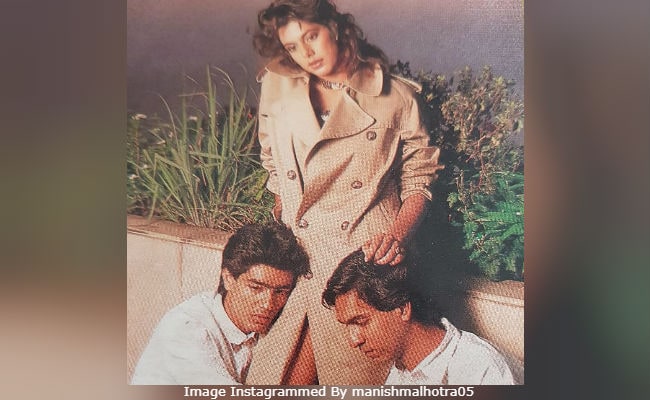 One is a famous fashion designer and other is an actress (Image courtesy: Instagram)

Fashion designer Manish Malhotra was about 19 when he shot for a magazine as a model. You didn't know, right? Well, he revealed this on Instagram today with the most epic throwback picture ever, trust us when we say most epic. In the photo, which appears to be taken from the magazine clipping, Manish Malhotra is seen with actress Pooja Bedi and another model and the photoshoot dates back to the Eighties, before he started his career as a costume designer in 1990. "Major flashback. I must have been 19-years-old. This shoot with Pooja Bedi for a magazine as a model. She sent me these pictures today and we laughed and I am sharing them with you'll. This is before I started my career as a costume designer in 1990. Time flies and how," Manish Malhotra captioned his post. It has been liked by celebs like Kriti Sanon, Malaika Arora, Bhumi Pednekar, Riddhima Kapoor Sahni and others.

This is the photo that we are talking about.

#major #Flashback ., I must have been 19 years old .. This shoot with @poojabediofficial for a magzine shoot as a Model .., #poojabedi sent me these pics today and we laughed and I am sharing them with you'll this is before I started my career as a CostumeDesigner in 1990 .. time flies and how

Manish Malhotra started his career as a model while he was in college. He then went on to become a costume/fashion designer. His first project as a costume designer was for Juhi Chawla's 1990 film Swarg. Since then, he has designed costumes for some of Bollywood A-listers. He launched his own couture label in 2005.