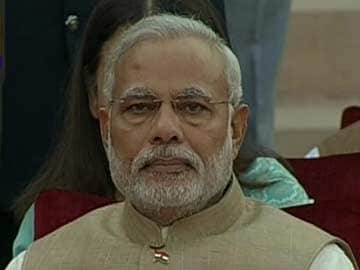 New Delhi: Narendra Modi will be sworn in as Prime Minister in a short while from now, along with his council of minsters.

All roads in Delhi lead to the Rashtrapati Bhawan, home of President Pranab Mukherjee, who will administer oath to Mr Modi at a grand ceremony in the forecourt of the presidential palace.

Among the almost 4000 guests gathered in the forecourt of the presidential palace, are leaders of eight neighbouring countries, including Pakistan Prime Minister Nawaz Sharif, who is seated next to Mr Modi's predecessor, Manmohan Singh.  On Dr Singh's other side is Hamid Karzai, President of Afghanistan.

Mr Modi's 95-year-old mother Hiraben could not make it to Delhi and will watch her son being sworn in as Prime Minister on television at her home in Gandhinagar.

Forty four ministers will be sworn in along with Mr Modi; BJP president Rajnath Singh will be his number 2 in government as Home Minister. Among the top ministers is Arun Jaitley who will be Finance Minister and will also have the additional charge of Defence.

Last night Mr Modi promised that he would head a lean Cabinet with a focus on "minimum government and maximum governance". He is expected to merge and restructure several ministries.
Comments
Elections 2014Narendra ModiNarendra Modi Swearing-inModi Cabinet