In Jagan Mohan's Meeting with Modi, Some Spot a Loaded Agenda 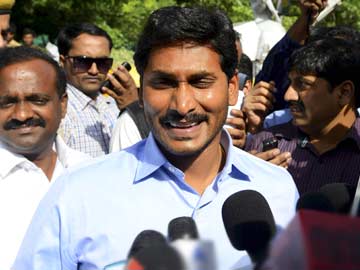 New Delhi: It isn't just allies who are lining up in Delhi to meet Narendra Modi, who will take over soon as India's next prime minister.

Mr Reddy said he offered "issue-based support" to Mr Modi, though "he doesn't need it." Mr Modi led the BJP to a parliamentary majority, so it is not dependent on allies or regional parties. Mr Reddy also said he asked Mr Modi to be generous in financial assistance to Andhra Pradesh.

Sources close to Mr Reddy say that he is worried that Mr Modi's ally, Chandrababu Naidu, who will take over as the chief minister of Andhra Pradesh, will persecute him with corruption cases. (Also Read: Chandrababu Naidu Set to be Seemandhra Chief Minister)

A recent Faceboook post by  Mr Naidu's Telugu Desam Party or TDP, says, "It is beyond doubt that he (Jagan Mohan) is going back to jail in 45 days." On Sunday, Mr Naidu said, "The law must take its own course... I don't have a grudge against anybody."

On June 2, the state will be formally divided into two states - Telangana will be carved out as India's 29th state, and the two regions of Seemandhra will form the downsized residuary state with Mr Naidu as chief minister.

In 2012, Mr Reddy was arrested and spent 16 months in jail before being granted bail. The CBI says that his father, Congressman YSR Reddy, who died while chief minister in 2009, forced entrepreneurs to invest in his son's vast business empire.

Mr Reddy has blamed the CBI investigation as an ineffectual attempt by the outgoing Congress-led to curb his growing influence in Andhra Pradesh.

Promoted
Listen to the latest songs, only on JioSaavn.com
"Sonia Gandhi did what she wanted... now let TDP do what it wants... I believe in God and destiny," Mr Reddy said recently.