In Andhra Pradesh, Results of an Important Election Today 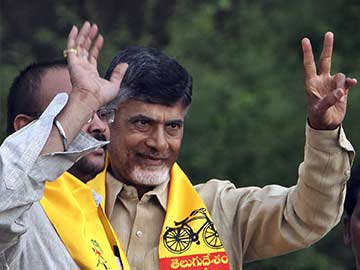 Hyderabad: Before the results of the national and state elections are counted, some political parties in Andhra Pradesh claim they've glimpsed the verdict. In the municipal or local elections, whose results are being counted today, they see a portent.

In Seemandhra, it's Chandrababu Naidu's Telugu Desam Party or TDP that is the big hitter. In Telangana, the region that will be carved out on June 2 as India's youngest state, the Congress is ahead. (Also Read: Telangana votes to elect first government)

Andhra Pradesh elects 42 parliamentarians. National and state elections have been held simultaneously. The BJP, which is expected to get the most seats in the national election, has tied up with Mr Naidu. ('It's rocking,' says BJP about alliance with Chandrababu Naidu)

For now, in Seemandhra, Mr Naidu's TDP is ahead of its nearest rival the YSR Congress Party (YSRCP) while the Congress has almost been wiped out due to public anger over the decision to split Andhra Pradesh.

The YSR Congress, headed by Jagan Mohan Reddy, claimed the results so far represent the urban and not the rural picture.  "People vote very differently for local as opposed to assembly and Lok Sabha elections," a close associate of Jagan Mohan said. (Also Read: In Modi's speech, Pawan Kalyan is hero)

In Telangana, the area appears to be rewarding the Congress for promising and delivering state-hood.

Promoted
Listen to the latest songs, only on JioSaavn.com
The Telangana Rashtra Samithi , headed by K Chandrasekhar Rao or kCR,  who fronted the movement for a Telangana state, is runner-up so far.  KCR's son, K T Rama Rao, says the results of local elections cannot be extrapolated for a state forecast. (Also Read: KCR urges Telangana voters to 'throw out Andhra parties')

Navjot Sidhu's Outreach To Punjab Women Ahead Of Assembly Elections