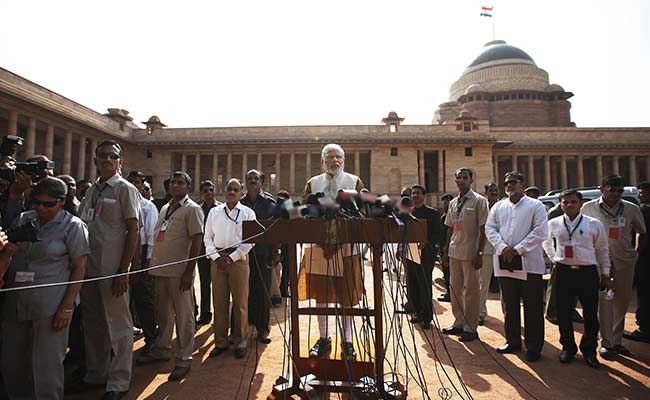 New Delhi: On the eve of his oath ceremony as Prime Minister, Narendra Modi has confirmed that he will head a leaner cabinet than his predecessor Manmohan Singh did. (Modi to Visit Rajghat Ahead of Swearing-In)

An official statement said on Sunday evening that Mr Modi has "adopted (the) guiding principle of 'minimum government and maximum governance' and also rationalization with a commitment to bring a change in the work culture and style of governance." (Narendra Modi to Shift to 7 Race Course Road on Monday night)

Mr Modi is expected to merge and restructure several ministries like, sources said, transport, which could include surface transport, shipping, metro, bullet trains and even perhaps Railways and Civil Aviation.

The sources sought to scotch speculation that internal security could be separated from the Home Ministry.

The statement from Mr Modi's office said, "The focus is on convergence in the activities of various Ministries where one cabinet Minister will be heading a cluster of Ministries who are working in complimentary sectors. Mr Modi is eventually aiming at Smart Governance where the top layers of Government will be downsized and there would be expansion at the grass root level (sic)." (Sumitra Mahajan, Not LK Advani, Likely to be Lok Sabha Speaker: Sources)

It called it a "good beginning" aimed at "more coordination between different departments" and bringing "a speed in process."

The statement, headlined 'Narendra Modi makes a dent in Ministry Formation,' noted that the Prime Minister designate had been busy for four days with the formation of his ministry and planning effective governance. (Chandrababu Naidu Meets Narendra Modi, TDP Likely to Get One Cabinet Berth)

It said, "in the ministry formation, the process of development will be more inclusive than it has been." (Rashtrapati Bhawan All Set for Narendra Modi's Swearing-In on Monday)

Promoted
Listen to the latest songs, only on JioSaavn.com
Mr Modi will be sworn in at the forecourt of the Rashtrapati Bhawan, the presidential palace at 6 pm on Monday along with his council of ministers. His party got a massive mandate in the national election, winning 282 seats on its own - a clear majority - and 336 seats with its 29 allies. (BJP + 29 Parties = National Democratic Alliance)