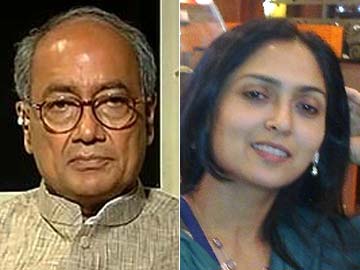 New Delhi: On Twitter today, Congress leader Digvijaya Singh declared that he is involved with Amrita Rai, an anchor for Rajya Sabha Television, but stressed "I do condemn encroachment in our private life."

"I have no hesitation in accepting my relationship with Amrita Rai. She and her husband have already filed a mutual consent divorce case," Mr Singh, 67, tweeted.

I have no hesitation in accepting my relationship with Amrita Rai. She and her husband have already filed a mutual consent divorce case.

Once that is decided we would formalise it. But I do condemn encroachment in our private life.

Pictures of him with Ms Rai have been posted recently on social media.  She said on twitter today that she plans to marry the Congressman.

I have separated from my husband and we have filed a mutual consent divorce papers. After which I have decided to marry with Digvijaya Singh

At 4 pm today, three of the top 10 trending topics on Twitter in India were on Mr Singh or Ms Rai.

In this election campaign, Mr Singh was among senior Congress leaders who attacked Narendra Modi, the BJP's prime ministerial candidate, after he for the first time publicly acknowledged that he is married. (In poll affidavit, Modi says Jashodaben is his wife)

Promoted
Listen to the latest songs, only on JioSaavn.com
Earlier this month, in election papers that he filed to run from Vadodara, Mr Modi for the first time publicly acknowledged that he is married by entering his wife's name in a column asking about his marital status. He had left the column blank on previous occasions, including in the last Gujarat state election in 2012.

The Congress, which is expected to be dealt a crushing defeat by the BJP after 10 years in power, seized the issue, alleging that Mr Modi's refusal to acknowledge his wife for decades reflects a poor attitude towards women.