Come May 16, Bangladeshi immigrants must pack up: Narendra Modi 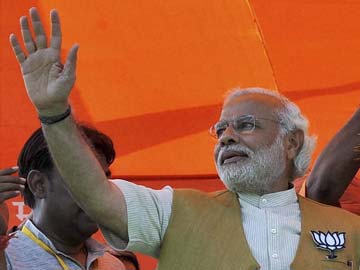 Serampore, Bengal: Narendra Modi has said that "Bangladeshis" will be deported if he comes to power, in his sharpest comments yet on illegal immigrants. They have been given the red carpet welcome by politicians just for votes, he said at a rally on Sunday.

"You can write it down. After May 16, these Bangladeshis better be prepared with their bags packed," Modi said in Serampore in West Bengal, which shares a porous border with Bangladesh. (Elections: Full coverage)

Targeting the state's Trinamool Congress government, Mr Modi said, "You are spreading the red carpet for vote bank politics. If people come from Bihar, they are outsiders to you. It people come from Odisha, they are outsiders to you. But if some Bangladeshi comes, your face seems to shine. This country cannot run like this. We won't allow you to destroy the country for the sake of your vote bank politics." (Assam government killing rhinos to make way for Bangladeshi immigrants: Narendra Modi)

In February, Mr Modi's comments appearing to draw a distinction between Hindu and Muslim migrants had triggered a row. (Read: Hindu migrants from Bangladesh must be accommodated: Narendra Modi)

"We have a responsibility toward Hindus who are harassed and suffer in other countries. Where will they go? India is the only place for them. Our government cannot continue to harass them. We will have to accommodate them here," he said. His party's manifesto also controversially mentions that India is a natural home for persecuted Hindus.

Some reports suggest that there are about 20 million Bangladeshi immigrants in India at present, but there are no reliable figures. Many of them have reportedly been able to snag voting IDs, ration cards and other documents for legitimacy, allegedly in return for votes. The BJP calls them a drain on the nation's income and resources.

Promoted
Listen to the latest songs, only on JioSaavn.com
Deporting illegal Bangladeshi immigrants has always been a part of the BJP's agenda, but Mr Modi's sharp comments indicate it could move beyond rhetoric if the party comes to power after the national election.

Recently, BJP president Rajnath Singh said if the BJP came to power, it would investigate "how so many people of a particular community could enter the country illegally and settle down."