"This is a very painful event because we have gathered here today to discuss the biggest scam in the history of Delhi. The Rs 2,500 crore scam of the BJP is even bigger than the Commonwealth Games scam of the Congress, Arvind Kejriwal claimed in the Delhi Assembly. 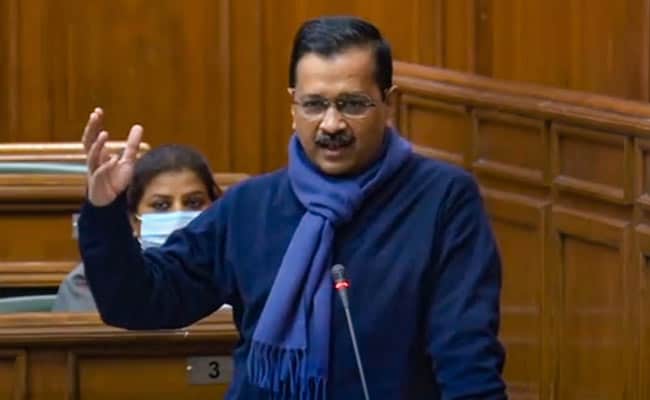 Delhi Assembly passed with voice vote, a resolution for CBI probe into the alleged MCDs scam

Delhi Chief Minister Arvind Kejriwal on Friday claimed that the alleged scam of Rs 2,500 crore in the BJP-ruled municipal corporations was bigger than the 2010 Commonwealth Games scam.

Addressing a special session of the Delhi Assembly, he claimed that scams of Rs 5,000-10,000 crore happen every year in the municipal corporations while giving required permissions for construction of buildings.

"This is a very painful event because we have gathered here today to discuss the biggest scam in the history of Delhi. The Rs 2,500 crore scam of the BJP is even bigger than the Commonwealth Games scam of the Congress, Arvind Kejriwal claimed in the Delhi Assembly.

The Assembly passed with voice vote a resolution for CBI probe into financial mismanagement and the alleged scam of Rs 2,500 crore in the BJP-ruled municipal corporations of Delhi (MCDs).

He asked the Leader of Opposition in the Assembly Ramvir Singh Bidhuri to push for a CBI probe into the alleged scam.

Rejecting the charges, BJP's Ramvir Bidhuri said the allegations of scam against the MCDs were "baseless . He also offered to resign if the allegations were found to be true by any independent probe agency.

The Chief Minister retorted, "You have claimed that you would resign if the scam proves to be true, then why don't you let the CBI probe it? When we demanded CBI investigation into the matter, they arrested those who demanded the investigation rather than those who committed the theft."

He claimed that when AAP leaders Raghav Chadha and Atishi tried to meet Union Home Minister Amit Shah and Lt Governor Anil Baijal with the demand of CBI probe into the "scam", they were stopped by the police.

"When Raghav Chadha said he would meet Amit Shah, the police arrested him. The police have never done this with rapists. Can't the elected representatives meet Amit Shah? Amit Shah should have allowed Raghav to have a cup of tea with him. What harm could Raghav have done to him?" Mr Kejriwal alleged.

Citing the BJP's demand of payment of Rs 13,000 crore dues to the MCDs, the AAP chief said courts have also said that all dues have been paid.

"The court has said that the Delhi government has paid its dues in full to the MCD, yet the BJP is seeking Rs 13,000 crore from the dispensation to again loot the money and do corruption, he claimed.

Mr Kejriwal said there are two models in Delhi, one of the BJP in MCD and the other of the AAP in the Delhi government. People of Delhi gave 62 assembly seats to the AAP model and rejected the BJP's model by giving them only eight seats in the polls, he said.

"BJP's 15-year black era' in the MCDs is going to end. I sincerely hope that 2 crore people of Delhi will end this black era in the upcoming municipal corporation elections," Arvind Kejriwal said.

The AAP leader claimed "everyone knows that the BJP-ruled MCDs take money from the people of Delhi to build a residential property in the city.

"Only RSS gets discount per lenter to build a property. And there is a yearly scam of Rs 5,000-10,000 crore in allowing lenter of the buildings alone," he alleged.

Presenting the resolution against financial mismanagement and the alleged Rs 2,500 crore scam for discussion in the Delhi Assembly, AAP MLA Saurabh Bhardwaj drew parallels between the BJP and a "greedy mother-in-law .

"MCD is like the daughter of Delhi that was handed over to the BJP in 2017 by people. But they indulged in rampant corruption and are now seeking Rs 13,000 crore from the Delhi government," he said.

The second day of the Delhi Assembly's special session on Friday started with noisy scenes, as the ruling AAP MLAs demanded a CBI inquiry into the alleged Rs 2,500 crore scam.

The AAP MLAs also went into the well of the House raising slogans and showing placards. They also displayed a large banner against the alleged Rs 2,500 crore scam in the House.

Speaker Ram Niwas Goel adjourned the House for 15 minutes as the ruling party MLAs continued to wave placards and raise slogans despite his attempt to bring order and continue the proceedings.

Participating in the debate, Delhi Urban Development Minister Satyendar Jain alleged that the MCD was synonymous with corruption.

"It is one of the most corrupt organisations in the world. Graft ranging from Rs 10 lakh to Rs 5 crore is prevalent in giving building permissions," he alleged.

BJP MLA OP Sharma staged a walkout when he was not allowed to speak during the Assembly session. The Speaker denied him permission, saying he had already dropped eight ruling party MLAs due to lack of time.

The House was adjourned by the Speaker after passage of the resolution.

The one-day special session called on Thursday for a discussion on the alleged scam in MCDs was extended till Friday as the House had discussed the Centre's new contentious farm laws on the first day of the session.