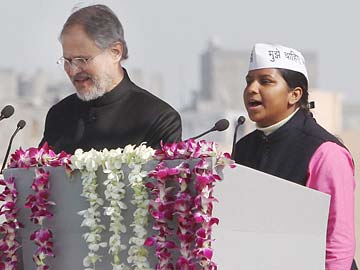 New Delhi: The youngest minister in the Arvind Kejriwal Cabinet, Rakhi Birla, today said that the government was in touch with international NGOs with a view to ensuring holistic development of differently-abled children at various shelter homes in the city.

The 26-year-old Ms Birla, who is the new Women and Child Development Minister, hoped that such an exercise would bring out the best in these children.

Ms Birla has been making surprise checks at various government-run shelters ever since she took charge as minister.

"The differently-abled children are made to watch television all day instead of engaging them in various activities for their proper development. Even if a normal person watches TV all the time, he or she will go mad," she told PTI.

She said that the government would soon recruit more teachers with expertise in the area of the training of differently-abled children.

"I have not yet gone through the files and haven't checked any data. I am at present interested in working on the ground and have been visiting homes to see the actual conditions there," Ms Birla said.

"Sanitation is a huge problem at these homes. Also, there is no maintenance of these buildings," she added.

She further said that, after a thorough assessment, she will cancel the contracts of food suppliers who are found to be delivering poor quality food items.

A review would also be held of the 181 helpline, the three-digit emergency number for women in Delhi launched by the previous Congress government, she said.

Promoted
Listen to the latest songs, only on JioSaavn.com
Ms Birla defeated four-time MLA and PWD Minister in the Sheila Dikshit government, Raj Kumar Chauhan, by around 10,500 votes in Mangolpuri.