Some unidentified men targeted Umar Khalid in the high security area near Parliament and gunshots were heard, but he escaped unhurt, according to eyewitnesses, even as the police asserted it will verify the incident. 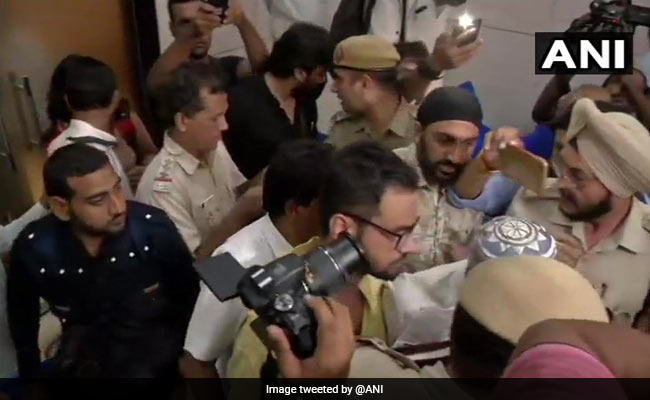 Shopkeepers and passersby were taken aback when they heard gunshots as some unidentified men targeted JNU student leader Umar Khalid this afternoon at Constitution Club, a venue for several political debates and seminars.

Some unidentified men targeted Umar Khalid in the high security area near Parliament and gunshots were heard, but he escaped unhurt, according to eyewitnesses, even as the police asserted it will verify the incident.

Shopkeepers and witnesses had contradicting stories to narrate after the incident. While some claimed that the accused deliberately dropped the weapon, others claimed that the weapon fell out of the pocket of one of the accused when they were running. A shopkeeper whose shop is right opposite to the venue was busy preparing tea when he witnessed two men running out of the main gate of the club.

"I was busy making tea and attending customers. I saw two men running out from the main gate of the Constitution Club. They crossed the road and apparently fired a bullet after reaching a distance and left the weapon before fleeing from the spot," he said.

He, however, said he did not see them firing and had just heard a loud noise which resembled that of a firecracker.

Another shopkeeper, who has a shop opposite the venue, said he noticed two men fighting outside the Constitution Club.

"I saw them running towards the road and heard gunshot. I saw that they had left the gun before escaping. Later, people started gathering on the road after hearing the noise," he said.

"It was like any other usual day. I was taken aback when I heard the firing. I first thought the sound was caused due to tyre burst. A crowd gathered and later we got to know that someone was attacked," he added.

Passersby also questioned the law and order situation in the city, just two days ahead of the Independence Day.

A passerby, who heard the gunshot, said he was quite scared and raised questions on police's claims of putting a tight security in the area.

"I had read in the papers today that there would be high security in the national capital owing to the Independence Day. But this is shocking. Armed men were roaming in the area without any checks and on top of that, they even managed to flee," he added.

Another passerby said if the bullet was fired in the air, it could have hit anyone.

"The bullet could have hit any passerby. Lutyens' Delhi is considered to be one of the most secure zones since it houses many important buildings. It is surprising that the security is so lax in this part of Delhi," he added.