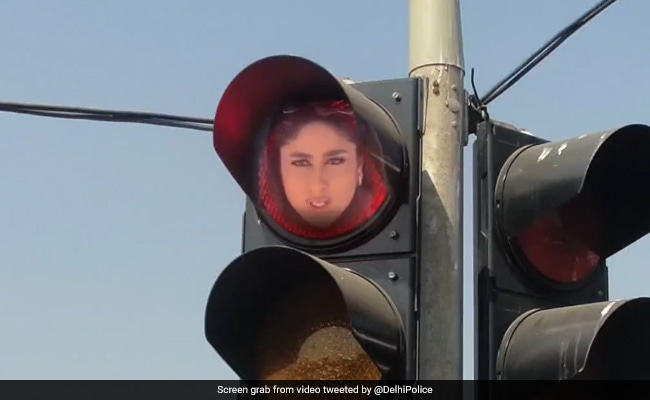 Infusing creativity into informative messages and announcements is an art and the Delhi Police seems to have mastered it. Urging people to follow traffic rules and highlighting the importance of road safety, the department has shared a hilarious meme.

While police strive to ensure that no one violates the traffic rules, some still resort to jumping red lights and endanger lives on the road. Hence, to make sure that people pay heed to the appeals, Delhi Police has roped in Poo, Kareena Kapoor Khan's iconic character in Kabhi Khushi Kabhie Gham.

The department has posted a video of a traffic violation on its official Twitter page which, other than the vehicle, also features our favourite Poo.

In the clip, a car is speeding past a traffic light while it is red. As the driver chose to ignore the traffic light, Poo, whose face has been superimposed on the red light, is heard delivering her famous dialogue “Yeh kon hai jisne Poo ko dobara mud kar nahi dekha.”

“Who's that traffic violator? Poo likes attention, so do the traffic lights,” the caption read.

Who's that traffic violator?

Poo likes attention, so do the traffic lights !#RoadSafety#SaturdayVibespic.twitter.com/ZeCJfJigcb

The message was definitely clear and fun too. However, this is not the first time Delhi Police has made use of some trending memes to convey a message.

The caption attached to the collage read, “Drive with a seatbelt on to avoid seeing the stars and the challan.”

Drive with a seatbelt on to avoid seeing the stars and the challan.⚠️#DelhiPolice#DelhiTrafficPolice#DilKiPolicepic.twitter.com/dQH2Hh0k8w

So, will you be daring to offend Poo the next time you hit the road?