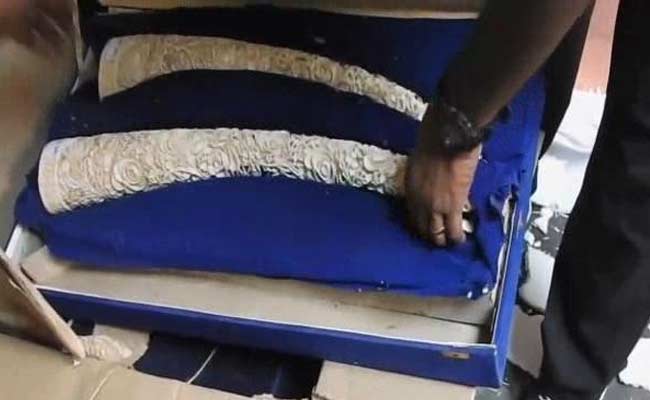 Over 480 kilograms of ivory was recovered from a businessman in Delhi.

New Delhi: Over 480 kilograms of ivory worth several crores in the international market has been recovered from a businessman in Delhi after a joint operation by Kerala Forest Department, Wildlife Crime Control Bureau and Delhi Police, senior officials said today.

The accused identified as Umesh Aggrawal is a Delhi-based businessman dealing in art and collectibles and is suspected to be the kingpin of an ivory trading syndicate. He was arrested on October 2 and taken to Kerala, where several cases are registered against him, said a senior official at Wildlife Trust of India (WTI), adding Aggrawal disclosed the location of hidden ivory on October 10, after which a special team was moved to Delhi.

"Once we were informed about the operation, the Station House Officers of Shakarpur and Zaffrabad police stations were asked to form teams and join the operation. Within hours, a raid was conducted and ivory was recovered," said Joint Commissioner of Police (East) Sanjay Baniwal.

Once the ivory was discovered, it took around 12 hours for the team to examine the haul, which was sent to Kerala today.

"This haul was the result of a carefully planned 'Operation Shikar'. The activities of the suspected syndicate came to light from the detailed analysis of call records of middlemen and poachers from Kerala," said the senior official, adding that crucial tip-off in this case were provided by WTI and its partner International Fund for Animal Welfare (IFAW).

The operation was initiated in June soon after the discovery of organized elephant poaching in Kerala and two persons, identified as Ajir Brite and Preston, were arrested. It later emerged that the duo allegedly supplied ivory to Mr Aggarwal.

Mr Aggrawal allegedly owned a well-equipped ivory carving facility which was operating from the basement of his three-storeyed apartment. Authorities suspect that Mr Aggrawal used to export high quality ivory from there, said the senior WTI official.

The suspect confessed his involvement in the illegal trade of ivory from the 90s. He used his company 'Art of India' which dealt in various artifacts from India to other countries and mixed ivory and ivory articles along with sandstone and resin statues to avoid detection.

He also openly manufactured and displayed articles which looked and felt like ivory in various art exhibitions to attract customers for genuine ivory products, said the senior WTI official.

He also said that he was compelled to move the illegal goods to a safer location after learning about the arrest of Brite and Preston, said the senior official.

Mr Aggrawal used one of his employees to organize a room to store the goods. The owners of the house were informed that the goods in the wooden boxes were just plastic items.

Mr Aggarwal used his own SUV and rented vehicles to move the ivory from his house to the secret place, locked the room and kept the key with him. He paid the rent on time and occasionally checked the goods stored inside, the senior official added.